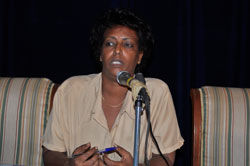 An annual assessment meeting of the Northern Red Sea regional Administration took note of the fact that the implementation of major development programs in the region is playing vital role in improving the socio-economic wellbeing of the people.

Massawa, 31 December 2010 – An annual assessment meeting of the Northern Red Sea regional Administration took note of the fact that the implementation of major development programs in the region is playing vital role in improving the socio-economic wellbeing of the people.

Moreover, 10 schools have been constructed at a cost of over 20 million Nakfa in the sub-zones of Gelalu, Ginda, Nacfa, Karora, She’ib and Foro, out of which 8 have already begun rendering service.

As part of endeavors to achieve food security through promoting soil and water conservation, about 100,000 meters of water catchments have been constructed, in addition to the putting in place and renovation of terraces and embankments, the reports elaborated. Efforts are also underway to reactivate the activities of the nursery stations in Mirara, Mai-Habar, Filfil and Mai-Adkemom with a view to reinforcing reforestation programs.

The meeting further took note of the installation and repair of solar energy-generated electricity in health institutions, and that the introduction of such devices in schools is making due contribution in providing computer application courses.

Speaking on the occasion, the Administrator of Northern Red Sea region, Ms. Tsegereda Woldegergis, explained that the implementation of development and reconstruction programs in the region such as the factories of cement, metals and foams, as well as the investment being made in ports and islands would bring about visible prosperity in the region.  The Massawa-Karora and Adi Keih-Foro road networks that are under construction would also provide added impetus to the development of the transport sector, she added.

The Administration further highlighted the need for carrying out effective soil and water conservation activities in the eastern escarpment so as to enrich underground water resources. Ms. Tsegereda also outlined the study and exploration activities underway towards constructing micro-dams.

The participants of the meeting adopted a number of resolutions and recommendations aimed at addressing social problems.