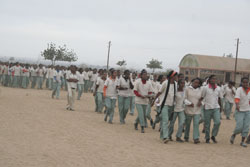 Today’s youngsters, if properly cultivated, guided, and groomed shall, no doubt, keep the country’s powerful economic engine humming. They are the future to make and unmake things. They decode and solve any social riddles and other challenges that may lie ahead. Thus, catering proper education, responsive to country-specific felt-needs and orienting them becomes the central question of all the time. This holds water because the future of a nation, whichever, best lies not only in the material resources alone but also and mainly in the palm of the huge reservoir of the trained, experienced and enterprising human resources.

Though we may be sitting on a huge deposit of natural resources, their exploitation to the sole and full benefit of citizens becomes a principle of paramount importance. This can be translated into reality if and only if a nation is in a position to do so by its home-grown trained and experienced human capacity. If not, the bowls and endowment of a nation fall into the hands of hawks and becomes a curse for all wishes and whims fizzle out and reduce themselves to risible attempts. The positive lessons that can be drawn from China and some Nordic countries could be cases in point. Coming back home, Eritrea which is rising from the ashes of a thirty-year-dragged war, is now in the making. After taking stock of the situation, the need for trained and experienced personnel to build the nation and exploit its untapped resources became more vivid.

Consequently and right from the word go, the catering of appropriate education to citizens was opted as one of the workable strategies instrumental for nation-building. To this effect, a relatively huge budget is earmarked annually for the education sector by setting it as one of the top priorities on the agenda for national development. Accordingly, the number of teachers and students has grown by leaps and bounds and schools have mushroomed to meet the corresponding demands, since the dawn of independence. Sawa, which is the brainchild of the national gross need, is one of these educational institutions which this piece of writing wants to modestly dwell on.

Driving 302 kms via Asmara-Keren-Kieru route along alternating asphalted and all-weather roads brings one eventually to the heart of Sawa, the operative word in this piece. Indeed, the name ‘Sawa’ may imply different meanings to different people depending on how they conjure it up and understand what it is and what it does. By some, it may be misconstrued as a godforsaken area built in the middle of nowhere, whereas for many others it may be depicted as a place where men/women make men/women of themselves; and others may entertain quite different opinions of their own. Whatsoever, Sawa is what it is and the primary objective of this piece is also to provide the correct information to correct misinformation by exposing the disinformation. In retrospect, the Warsay Yikealo Secondary School (WYSS, for short), started in 2002/2003 academic year.

It passed through a transformational change from a military camp into an academic sphere. Currently, if one happens to be there as a traveler or otherwise, it is easy to witness that more than 17,500 students are attending their secondary education in 225 classrooms. As per the statistical data furnished by Ato Kiflay Andemichael, the Director of the Warsay Yikealo Secondary School, 42% of the whole student-population is female and the rest male. The centre caters education in 68 schools with an average of 260 students each; and accommodates about 400 teaching and 40 administrative members of staff all in all. In both the two streams – natural and social sciences- almost eight subjects are being taught (viz. English, Mathematics, Biology, Physics, Chemistry, Business and Economics, Geography, and History), not to mention the other three subjects already in the pipe (viz. Civics, Agriculture, and ICT). “During this one-year programme,” says Kiflay, “the students, as is being witnessed by the current batch, are exposed to more uniform and shareable learning opportunities and experiences which to many of them  might be a bit difficult to have access if they were in their respective former schools. Over and above this,” says Kiflay “the students are highly coached after diagnosing their academic problems or weaknesses that call for more scholastic attention.

What is also more heartening is,” he goes on to say “the fact that the WYSS lays a conducive ground for the students by creating an umbilical cord that links them to the style of the Eritrean Secondary Education Certificate Examination (ESECE). Since nothing is achievable by mere wishes and whims,” remarks Kifl ay “as much input as possible is put to the academic style of Sawa in order to bring the whole mission home. To quote but a few,” says Kifl ay “the best, experienced and committed teaching staffs are assigned to this School and are carrying out their professional obligation aided by five library centers equipped with highly focused books. One library is allocated for the teachers and the other four for students (two exclusively for girls near their respective residence quarters) and the rest two common to all. On top of this,” he says “much of the principles of student-centered and interactive pedagogy which got their expression in peer education or co-operative classes by and to students are conspicuously observable. The intervention of teachers during the review questions remains in place. In short, we leave no stone unturned to make our students be good scorers; and all coordinated efforts focus on academic excellence” says Kiflay. On top of the regular curricular subjects, room is also given to co-curricular subjects. Such supportive extra activities like peer education, tutorial classes, academic knowledge contest as well as debating contest, audio-visual presentations on different subjects, life skills related with health, sportive activities (to keep them physically fit and mentally alert), school-based exchange of experiences, entertainment programmes, all have a positive and bearing impact on the facilitation of the teaching-learning process. Such opportunities, no doubt, equip the students with a different psychology- to lead themselves to personal confidence.

The fact that 253 students scored full mark (4/4) last academic year, proves that the School works day and night to cultivate worthwhile students as per its intention and mission. The Administration and the teaching staff work hand in glove to bring a marked difference at the School. There is also a strong bondage between the students and the caretakers, the students and the teachers, and between the teachers and the caretakers. As an expression of such integrated approach, the teaching-learning process enjoys a special facilitation. “As an outcome of this,” says Kiflay “it is a matter of record that in the 2006/2007 academic year, 12% of the students successfully passed for degree and diploma programmes. However, in the 2009/2010 academic year, more effort was exerted as a result of which 38% of them passed for degree, diploma and certificate programmes. This academic year, we hope to progressively move and be on the march”.” The opportunity,” says Kiflay “that all grade-eleven-complete students come together and meet in Sawa gives them also the rare chance of coming and mixing together with other ethnic groups. When asked what she feels for being there, Miriam Yosief Sium jubilantly said, “it is fantastic and a rare chance to be here. In a word or two, it is simply magnifi cent.”

Indeed, Sawa serves as a vantage point and a melting pot where all come together for a common grounding in different aspects as sons and daughters of  the same country.” Asked how students feel when they arrive there, Kiflay says, “It is true that when they arrive at Sawa, it is natural for some of them to have some sort of teething troubles (short term problems) due to different backgrounds and behavior. The important point is that they soon get adapted to the new areas and situations and become a homogenous whole. Honestly speaking, our School faces onerous challenges at the very outset and is more than ready to unceasingly give practical solution through orientation. It does this not as a passing fad but as part of its academic duty and purpose. Accordingly and with the passage of time, students come to the right track and harden themselves to become au fait with the properties of the surroundings.

This special knack of the students becomes clearly observable mainly before the start of the second semester, after which they build confidence and get adjusted to the diversified living conditions.”  “Our lofty responsibility and mission during each year of the continuous programme,” concludes Kiflay “is not and should not be to churn out nominal grade-twelve complete citizens, but to cultivate productive citizens equipped, as much as possible, with important elements of holistic knowledge that enables them to earn not only marketable qualification but also to be job creators rather than seekers”.