Colorful musical concert staged in connection with the New Year 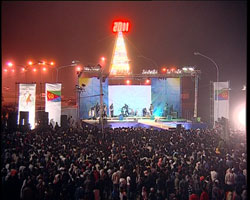 Speaking on the occasion, the director of the office of the National Holidays Coordinating Committee, Mr. Tesfai Berhe, pointed out that 2010 is coming to an end  at a time when the nation is standing on a very promising and reliable ground more than never before. To reach this stage, the Eritrean people have waged resilience and steadfastness so as to cope with temporary problem, while at the same time managed to multiply their limited resource and register impressive development achievements.

The concert that continued from 8 p.m. in the evening to 2 a.m. in the morning was transmitted live through ERI-TV, Dimtsi Hafash and Radio Zara, and that it won broad acclaim on the part of the spectators.

The participants of the event told ERINA that the concert in which over 40 veteran and young singers, comedians and famous musicians took part gave them special feeling.

They further stated that the show involving traditional and modern musical performances, as well as comic songs and dances fully attests to the effective preparations made, and as such could be organized in a more special manner in the future.

Foreign participants of the concert also expressed admiration to the celebrations and said that they have personally witnessed that there prevails peace and stability in Eritrea, as well as a dignified and patriotic people.