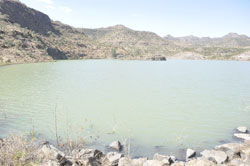 It was cold outside in the late October air as we stepped from the Toyota Hilux onto the squelchy trail leading into an extraordinary dam in the Debarwa sub zone, in the Guh-Chea plains. As our team gazed down the heavy forest of Aba Meta Monastery, our guide pointed. “Look! We are now closer to the biggest dam in the subzone, so it is worth visiting it.” “Oh! That is a good idea,” said one of my colleagues. “But the time is gone; it is getting early evening, around 5:30.” I asked how far we would go from the monastery, and the guide told me some two kilometers. “So we will need to fast drive,” our driver responds.  All of us nodded our heads, and we made our way toward the hill where our car was parked. At first we lost our trail in the rich farmland Adi Bana. But then later with the help of our guide, we made our way down through a thick cactus trees. Within 10 minutes we were able to reach in the western part of the Dam. That is an amazing work. “This must be the Eritrean version of Mega structures? I anxiously asked. The biggest dam I had ever seen prior to that was the Gerset Dam which is found in the Gash Bark region, Golij sub-zone. Lured by the mighty work, our photographer went closer to the dam, took a dozen of shots from various angles until he suffered a heavy pain from a sisal thorn in the left foot.   On my part, I had to go far closer so that I would learn more of the dam.

The water was so deep, some 20 meters; stretched out east -west for more than half a kilometer between a couple of mountain chains. The dam is so enormous with the capacity to hold more than three million cubic meters. As it is located in the fertile plains of the region, it is expected to enable the locals from Adi Hisbay, Takita, and Shum Habtuy to harvest more than three hundred hectares of land twice a year through irrigation. Bdho General Construction Company, famous for its construction experience and achievements takes the credit for the good work. More strikingly, the dam has changed the beauty of the landscape.  The calm nature of the water perhaps has attracted the hundreds of unusual ducks that were untiringly swimming back and forth. More than anything else our team was admired by the engineering and the art of construction of the dam. More importantly, such a dam indicates the heavy investment the government is doing for the bright future of the society. Hence, on our way back to our hotel, all of the team members had had a chat on the achievements of the government in the national reconstruction program. “It is only when one ventures around the country, one comes to know what really is going on,” said a friend. “What we have seen so far is a drop from an ocean, my friend,” responded another friend.

Right after the end of their conversation the two friends, certain judgment rang in my ears. I was reminded of the saying, “Seeing is believing.” But again I wondered to know if every Eritrean has got the right understanding of what the industrious Eritrean government is doing.  For God’s sake, one should come and see what is going on all over the country so that one would be convinced oneself with the work the government is doing for the better future of the Eritrean people. After all, projects such as the Warsay dam have been observing here and there around the country are done without any external assistance.  To the ones who lacked information, talking without enough knowledge of the activities running in the country, let them come and witness. Some other parties have also naively said that the development progress of Eritrea has been hampered by the recent border war. But such striking projects like that of Warsay dam simple examples to let them know that it is on the contrary. The Eritrean development projects, even with all the major challenges, did not stop. In fact the biggest development projects were constructed parallel with the task of defending the Weyane invasion.  Hence let them know that agricultural projects such as the Warsay dam, Gerset, and Fanco were constructed in the ashes of the invasion. To many African people, this noble work must be “a miracle.” They have never imagined, even in their dreams, such a committed government that works for the common good does exist.

They have never tested the hard working and good willing government- – a government that is like Eritrea. Unlike many other self-serving African leaders, Eritrean leadership has been determinedly working for the betterment of its people. It should be this government that should serve as   a symbol of hope in Africa—a continent that is suffering from the corrupted and greed leaders. Where the hell in Africa, in a region equivalent to the southern region of Eritrea, has a government built a total of 101 dams in less than a couple of decades. Also thanks to the mighty people of Eritrea. My intra-personal conversation stopped only when we reached our dinning hall, The Bahre-Negestat Hall. That is not the end, the next day; the team had to visit another interesting dam. Thus, late in the morning hours we headed our way towards the south west of the city of the ancient kings, Debarwa.

Cruising through the vast farmlands, in a one hour drive, our team managed to visit the sub zone’s second largest dam, the Bidho Dam.  Coming closer to the dam I managed to observe a hawk circled overhead.  I thought there could be some creatures in the water, things like fish. Soon I would see from afar a couple of men yachting in the dam. I asked a woman nearby about the boatmen. She told me that they were guests from the Ministry of Fisheries. They were doing some kind of research in the dam. Perhaps they were doing some kind of test to grow fish in the dam. Hence, apart from agricultural use, the dams have extra significance of growing fish. “Well-done, really amazing dam,” said a friend of ours. Not long after, I would see a woman appreciating the good work of the government.

Pointing at the dam, she said: “This dam is our hope; our strength and moral. What else can the government do more than providing us with this life?”  To the villagers of Kakebda the dam for sure is life. If it were not for that dam their life would not have changed. Here and there one observes farmers digging their farms. “We are able to cultivate two times a year,” the women added.  What more? On the other side of the dam is the exemplary farmer who recently received an award of Toyata Hilux and a cash of half a million Nakfa from H.E. President Isaias Afwerki. Mr. Gebremichael Gebremeskel, after the award he received has attracted other industrious farmers in the village.

Weldemichael Tesfay, another farmer from the village of Kakebda, said, “We have the water, we have the land; we have learned from the leading model from our friend Gebremichael ,” Mr. Weldemichael said. “Now what is left is work diligently. Down the dam, a stream of clean water continuously fl ows creating a marshy land that created another opportunity for the locals. Close to the water catchments and embankments, some village children bathe in; some women wash the families’ clothes. Hence, based on the views of village of Kakebda the dam has fundamentally altered the living of the villagers. A girl washing clothes said, “All our activities are related to this dam.” This is not enough. According to Miss Luula Asrat, administrator of the sub-zone, the dams are paving the way to self reliance. Hence, in a bid to strengthen this means of development, the government has a plan to construct another five dams in the near future.