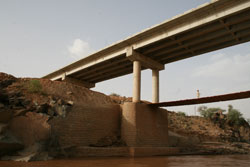 Many local construction companies and varied institutions have been active participants in implementing varied projects. Many of infrastructural activates that have been carried out in different parts of the country have enabled societies to  get improved transport,  energy, health, education, communications and other services.

Roads construction has been among the nation’s major accomplishments. The ground work for the Massawa-Irrafayle road has been finalized and asphalt works are in progress. The Barentu-Tesseney-Talata-asher road has been successfully completed with the exception of minor unfinished details. Likewise, construction of the Alebu-Gash Bridge has been completed.  Himbrti-Mensura line—a very crucial link between the Central and Gash Barka regions is under way; has so far reached the village of Habella. Many small and large bridge constructions have been monitored by the Ministry of Public Works (MPW) for defects such as nine pre-stressed girder bridges in Gash Barka, and Mai-Tsebri Bridge in the Southern region among others, which have been substantially finalized and are ready to give efficient transportations services.

The diversified infrastructural activates also include the construction of irrigation dams and water diversion structures. The rehabilitation of Aligidir irrigation system can be cited one among the many tasks finalized for the reinforcement of the agriculture sector. The infrastructural activity includes the over all canal system at 680 km, metallic gates and an embankment dam and prevention against flood destructions. Reports of the ministry of Public Works indicate that most of the work components have been completed and dam construction is underway.

The Public Work Ministry’s department of engineering has been engaged in checking and approving of projects designs.  Of the many projects headed for approval of design include Education Ministry’s Curriculum Development Center and National Accreditation and Evaluation Center designs that have been underway, where as foam-concrete housing project and architectural designs of Tesseney and Mendefera Stadiums as well as Bihita Tourists center have been approved. New projects include TB Treatment Center in Asmara and Halibet Hospital upgrading project.

The list of construction works that are still under supervision indicate that substantial infrastructural activities have been carried out in different parts of the country. The Department of Urban Development (DUD) has so far accomplished many tasks in planning, surveying, designing as well as housing. In the field of surveying the DUD checked sites for the survey works conducted by regional infrastructure departments.  Hence,  reports of MPW show that a total of 1,486 hectares have been checked in Anseba Region, about 926 hectares in Gash Barka region and around 152 hectares in Southern region.  According the finalized development plans, 308 plots that are expected to accommodate 1,504 inhabitants have been identified in Keren.  Development plan of Assab Sekir will cover a total of 314 hectares.

In relation to urban  networks  infrastructural design that include  the network design of water supply, electricity and telecommunication, the ministry has prepared electricity network distribution for Adi-Quala and  Adi-Keih in the Southern Region  and Mogoriab in Gash-Barka that cover a total area of 505 hectares. Water supply network and sanitation network for Mogoraib covers a total area of 231 hectares. Additionally, the ministry has finalized Urban Housing Survey of the year 2008-2010 that would give broader outlook on the current and future development of housing situation of the country.

The developmental tasks charted out to be implemented in the 2011-2012 cover a wider range of the nation’s geographical area. Construction of Elabered- Adi-Nia’men dirt road, Barentu-Shambuko dirt road, Agordat-Bisha-Sawa road, Himbrti-Mensural-Agordat dirt road among others and road maintenance works on the major roads of the country would enhance the country’s ability to provide efficient services enabling smooth trade activities while reducing costs of goods and also saving time and energy. The dams and water diversion projects would impact agricultural activities that would lead to the ultimate destination of realizing food security.

Generally, besides greatly changing people’s living standards, reliable and adequate infrastructures would reinforce the country’s endeavors towards economic growth. It would also open a viable environment for new local and international investments, which are mainly dependent on quality infrastructures.

Nothing But A Sheep/Goat For The Holidays