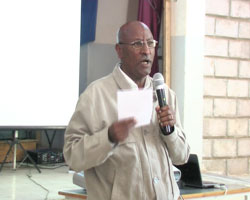 The Minister of Agriculture, Mr. Arefaine Berhe, urged members of the farming community in the Southern region to step up endeavors towards achieving food security.

Mendefera, 7 January 2010 – The Minister of Agriculture, Mr. Arefaine Berhe, urged members of the farming community in the Southern region to step up endeavors towards achieving food security.

Speaking at an assessment meeting of the Agriculture Ministry’s branch in the region that was held in Mendefera on January 5, he commended their efforts in boosting honey, milk and fruits production alongside other farming activities. The Minister further highlighted the need for taking more concerted action in combating deforestation.

The head of the Ministry’s branch office in the region, Mr. Bahta Tedrow, indicated on his part that successful tasks have been accomplished through introducing modern farming methods at substantial expenditure. In this connection, he explained that water resources impounded in wells and micro-dams have been utilized for fruits and vegetable farming, in addition to reserving about 5,000 hectares of rangelands towards ensuring animal feed. Milk production has also shown a growth of 65%, he added.

Noting that farmers engaged in animal husbandry, as well as fruits and vegetable farming activities are making due contribution to stabilizing local market, Mr. Bahta stated that honey production has increased by 71%.

Also speaking on the occasion, the Administrator of the Southern region, Mr. Mustafa Nurhusein, called on villages to increasingly resort to reserved land so that endeavors to ensure animal feed may borne fruitful outcome.

The participants of the meeting adopted a number of resolutions and recommendation aimed at boosting output.