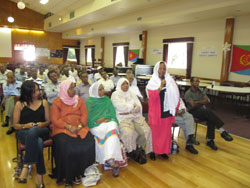 The 11th Eritrea Festival in Australia and New Zealand that continued for 4 consecutive days concluded on January 9 with patriotic spirit.

Asmara, 11 January 2010 – The 11th Eritrea Festival in Australia and New Zealand that continued for 4 consecutive days concluded on January 9 with patriotic spirit.

Speaking at the Festival that was held in Melbourne city, the Eritrean Ambassador to the US and Canada, Mr. Girmai Gebremariam, opened an arts exhibition portraying the all-round nation-building endeavors. He also conducted a seminar on the objective situation in the Homeland and the integrated national resolute rebuff.

Noting that the Eritrean people waged unparalleled resolute rebuff and steadfastness against enemy acts of hostility, the Ambassador lauded the dedication and active participation of Eritrean citizens living in Australia and New Zealand over the past years. In this respect, Mr. Girmai expressed conviction that the resolute rebuff would continue with added vigor.

The Chairman of the Festival coordinating committee, Mr. Abraham Hadgu, on his part expressed appreciation to all those who made due contribution for the success of the festival and asserted that the national resolute rebuff would be reinforced.

In the Festival in which Eritrean nationals from different corners of Australia and New Zealand took part, various programs were featured, including cultural and sports programs, Family Day and entertainment activities.

Inhabitants Of Melebso Getting Access To Various Social Services