A moment with Luigi Hussein 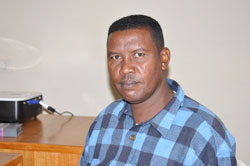 A short-story book in Kunama language titled ‘Salama’ will be inaugurated on January 16 in Barentu, Gash-Barka region. The Kunama language, categorized under the Nilo-Saharan family, has several dialects including Barka, Marda, Aimara, Odasa, Tika, Lakatakura and Bitama. The speakers of this language are one of the early settlers of the country along the western region. Members of this ethnic group are distinguished by their unique cultural heritage, matrilineal genealogy, as well as diverse music and dance traditions. Although Government policy strongly encourages the development of all national languages as evidenced by the mother-language based elementary education, years of colonial repression and neglect has resulted in scarcity of written materials in many of the local languages. The publication of the first short story in the Kunama language would thus inspire other gifted authors who seek to put their thoughts on paper in local languages. Shabait conducted a brief interview with the author of ‘Salama’, who is also the head of the branch office of the National Union of Eritrean Youth and Students in the Gash Barka region, Mr. Luigi Hussein. Excerpts follow:

Let’s start with when and how you came up with the idea of writing a book?

I used to constantly write articles for the Kunama Radio program in the Dimtsi Hafash and some of my acquaintance suggested that I should contemplate writing a book. However, it was during the TPLF invasion in 1998 that the idea of writing a book first came in my mind. To make a long story short, I am happy that the book was finally published after so much struggle. I am very grateful to those who extended their support until its publication.

Tell us about the book?

It is based on the true story of a young man who grew up in Shambuko village and fell in love with a young woman there. Before he got engaged he went for national service and then the TPLF regime’s war of aggression erupted. He came back in 2000 to his village and married the girl he loved. After his honeymoon he returned to his post and never came back again. He was martyred in safeguarding the nation’s sovereignty before he had the opportunity to see his son, Salama.  Besides, the book narrates about the history of Shambuko and the people’s displacement during the war and their steadfastness in defying the entire situation. The assistance of the local community in social activities to the families of fallen heroes is also described in the book.

What was your objective in writing this book?

Writing a book is one of the best ways to preserve oral tradition and promote indigenous languages. Only written events and traditions have managed to survive throughout the centuries of world history. The publication of this book would be a starting point for writers in this language as there remains so much to inscribe and document. This short story would also be used in schools as a reading material.

What can you tell us about the reading habits of the Kunama society?

With the expansion of access to education and continuous campaigns regarding its advantages, the number of people who can read and write is increasing. Gradually, reading habits of the people will also develop, given the right amount of efforts.

Do you have plans to publish another book in the near future?

Well, I have already completed writing two books and they are under publication.  The first is about culture and youth, and the second would be regarding traditional Kunama diet system based on research.

Child Birth Traditions of the Tigre Ethnic Group(Part I)

New schools under construction in Sembel and Kushet