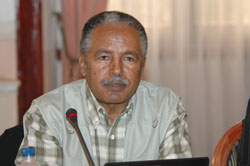 The Central regional Administration held a meeting from January 13 to 14 to assess the tasks accomplished in 2010 as regards the expansion of equitable social service and implementation of major development programs.

Asmara, 15 January 2011 – The Central regional Administration held a meeting from January 13 to 14 to assess the tasks accomplished in 2010 as regards the expansion of equitable social service and implementation of major development programs.

Reports presented at the meeting indicated that potable water supply projects have been implemented at an expenditure of over 10 million Nakfa in the villages of Adi-Gombolo, Defere, Embeito and Kodadu, while the implementation of similar projects in Tselot and Adi-Hakefa are nearing finalization. Besides, wells have been dug in the villages of Ader’ade, Adi-Hakefa, Guritat, Dirfo and Adi-Gin, in addition to the renovation of hand-pump and wells in 10 villages.

Moreover, the reports pointed out that commendable tasks have been accomplished in the construction and renovation of roads, pedestrian walks, installation of street lights and traffic safety. More schools have also been constructed, which in turn increased student enrollment in education.  Equally praiseworthy achievements have also been registered in the health sector, the reports added.

The reports further outlined the activities undertaken focusing on the preservation of natural resources, ensuring the supply of crops, fruits and vegetables, milk, meat, honey and egg, as well as ensuring animal health, among others.

In closing remarks, Mr. Kahsai called on all bodies to redouble endeavors for the effective implementation of the envisaged action plans so that the year 2011 may become a potent force in the development drive.