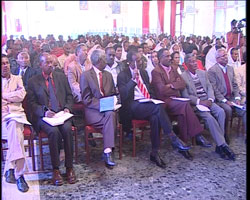 The Central regional Assembly held its 10th regular meeting on December 15 at the Municipality Hall under the theme: “Bright Future: Outcome of Our All-Round Endeavors.”

Asmara, 17 January 2010 – The Central regional Assembly held its 10th regular meeting on December 15 at the Municipality Hall under the theme: “Bright Future: Outcome of Our All-Round Endeavors.”

The Chairman of the Assembly, Mr. Abraham Semere, stressed the paramount importance of bequeathing the noble values of the Eritrean people such as steadfastness, commitment and self-reliance to future generations.

Also in a report he presented at the meeting, the Secretary of the Assembly, Mr. Eyob  Hadgu, indicated that the market price of all consumption goods, fruits, vegetables and grains  this  year show a relative decrease compared to that of the last year. However, the price of meat, cheese and beans has increased, while shortage of milk supply and other shortcomings were witnessed.

The Assembly took note of the commendable task accomplished as regards soil and water conservation activities. It also put forth  views highlighting the need for asphalting roads in Asmara city, constructing sewage canals, improving the distribution of potable water supply and streamlining the increasing tariff in telephone service, as well as giving due attention to the problem of street light and transport service. Moreover, the regional Assembly adopted a number of resolutions and recommendations, including the need for the general public to ensure environmental security, strengthening efforts to bring about fundamental change in education, promptly replying to public complaints and the like.

In closing remarks, the Administrator of Central region, Mr. Kahsai Gebrehiwet, called on the public, especially Assembly members to take active role in the implementation of development programs.