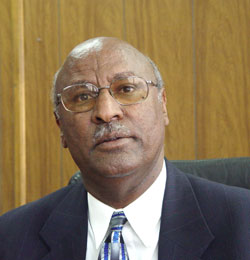 The Minister of Agriculture, Mr. Arefaine Berhe, said that the activities carried out to boost output need to be farmer-centered. He made the remarks in a meeting held in Barentu to assess agricultural undertakings in Gash-Barka region.

Barentu, 18 January 2011 – The Minister of Agriculture, Mr. Arefaine Berhe, said that the activities carried out to boost output need to be farmer-centered. He made the remarks in a meeting held in Barentu to assess agricultural undertakings in Gash-Barka region.

Mr. Arefaine further urged all agricultural experts and heads to share their knowledge and know-how with members of the farming community. He also called on the farmers to make good use of the introduced modern farming methods so as to boost production.

Noting that the existing micro-dams and water reservoirs in the region have impounded sufficient volume of water as a result of good rainy season last year, reports presented at the meeting indicated that rangelands are in good condition. Veterinary service, including vaccination program was also undertaken for over 2 million livestock at an expenditure of 1.2 million Nakfa.

Moreover, encouraging soil and water conservation activities were carried out at a cost of over 27 million Nakfa, in addition to the construction of water catchments. The reports further pointed out that 18 new water reservoirs have been constructed at an expenditure of about 10 million Nakfa and that more others underwent renovation. The envisaged construction of 2 new micro-dams at a cost of about 40 million Nakfa was not implemented at the set timetable due to lack of machineries, and hence the project would be accomplished in 2011.

The reports went on to indicate that various modification tasks were undertaken in the water diversion schemes of Hashenkit, Angulit, Diriesa, Berha-Tara and Asheda so as to enable them provide sustainable service.

The head of the Agriculture Ministry’s branch in Gash-Barka region, Mr. Meseret Gebremichael, said on his part that the agricultural programs implemented in 2010 made major contribution in efforts to achieve food security. Top attention would be given to the task of promoting forestation and preventing deforestation, as well as enhancing dairy farm activities this year, he added.