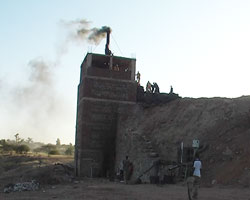 He pointed out that successful tasks have been accomplished to properly study the nation’s mineral resources and utilize them for the benefit of the people and the nation. As a result, mining sites have been identified in a number of areas in the country, he added.

Mr. Alem further explained that mineral resources in the country are solely owned by the people themselves, and that the Government shoulders the responsibility of their management so as to reduce possible damages in mining activities.  Twenty foreign companies are engaged in studying, exploring and mining activities in Eritrea thanks to the Government’s policy that encourages conducive mining investment, he elaborated.

Noting that the year 2010 was a turning point in the country’s mining activities, Mr. Alem indicated that the putting in place of infrastructure and mining experiment facilities have been finalized in the Bisha Gold Mining Plant, and that it would enhance production as of this year.

Action plan for 2011 focuses on undertaken gold mining activities in Zara and mining of potash in the Northern Red Sea region for agricultural purpose, identifying and studying mining sites, as well as other related tasks, he disclosed.

123 students graduate from College of Science and Marine Technology