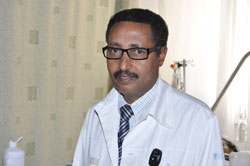 Imagine the catastrophe and despair a family could experience when its breadwinner lost his life due to a heart disease.  Beyond the frustration it inflicts on the specific family, such an unfortunate incident would expose the same family to socio-economic vulnerability. Not only in the family unit, the dire consequence of the tragedy has a negative effect in the all-round development of a given nation. This is in view of the fact that possessing a healthy and physically fit society is a prerequisite in building a strong and prosperous nation. What makes even it even worse is that most heart diseases can be treated and cured, provided the necessary medical know-how and equipment are available.

However, it is a well-known scenario to witness a number of people suffering from heart disease in developing countries in particular lose their lives simply due to lack of surgeons and medical equipment at their disposal.  It is also worth noting that developing heart surgeons and putting in place the necessary medical equipment and facility to this end is not only quite demanding but also could not be achieved overnight. Taking this into consideration, one may conclude that fostering close cooperation of partnership with various countries and organizations that possess the required capacity is indeed the potent weapon to combat heart disease.

It is from this perspective that the Eritrean government continues to create conducive ground for foreign heart surgeons to channel their expertise in carrying out surgery on Eritrean patients suffering from heart-related diseases.  It is now becoming common to hear in media reports that a number of nationals suffering from the disease underwent surgery through the collaboration of Eritrean and foreign doctors.  A number of medical teams from various organizations, including “Hammer-Forum” and “Hanover” have carried out several successful surgeries on Eritrean patients from all walks of life who have been suffering from this disease for long time. Such a noble gesture symbolizes the government’s commitment to enhance cooperation partnership towards relieving patients from their suffering.

Just recently, a 22-membered medical team from the German-based Hanover and Wuerazburg universities visited Eritrea and carried out successful heart surgery together with Eritrean doctors on 12 patients. The fact that almost all the patients who underwent surgery are breadwinners of their respective families makes the operation quite decisive to the well-being of the families.
Though there have been many philanthropic doctors who volunteered to come to Eritrea and conduct such surgeries, the initiatives of Eritrean specialists residing in abroad have also been very imperative in familiarizing Eritrea and the major areas that need to be addressed with such collaborations of specialists form around the world.

Mr. Zeremariam Tewoldemedhin is anesthetist who has been working with the Hanover medical team for more than 20 years. He succeeded in finding ways of extending such a help with the collaboration of this medical group who have been willing to work in Eritrea. The Hanover medical team is coming to Eritrea for the third time to conduct Cardiac surgeries with the collaboration of local specialists with a set goal of knowledge transfer.
As regards the interests of the medical group in rendering such services in Eritrea, Mr. Zeremariam said that the group is highly appreciative of Eritrea’s culture and tradition, which prompted them to revisit the country.
The Heart Help organization, which was founded in 2008, comprises of a group of doctors, nurses, and technicians who are members of the Hanover medical faculty. This year’s team in particular includes multinational members such as from Eritrea, Turkey, Austria, Palestine, Greece, the UK, and of course from Germany.

A member of the surgical group and the head of the German medical team, Dr. Lobbes Wolfgang said that they found the hospitality of the Eritrean people very rewarding. “The ever smiling patients who are in need of medical support, in this particular case of cardiac problem, makes us want to keep coming even for many years,” he said.
So far the team has relieved the pains and prevented possible deaths of many young patients. According to Dr. Wolfgang the medical group has been conducting successful surgeries twice a year since 2008.  The results are just encouraging that young people who underwent surgeries so far are doing well in their daily activities and would continue to support their families and do whatever they can do as youngsters.
“As the long run objective of partnership cooperation is to share experiences and enable Eritrean doctors to conduct cardiac surgeries on their own, we are working to create a system of sharing ideas in the surgical field,” Mr. Zeremariam said.  In this regard, Dr. Wolfgang also indicated that they have been working in sharing experiences with Eritrean specialists and have already succeeded in doing that in a small scale with the staff form the intensive care unit, ICU and the OR nurses.

Dr. Wolfgang is highly impressed by the development registered in the health sector and he says the cardiology department has improved a lot.  The medical staff is acquiring the necessary skills of diagnosing special problems that can be treated with the availability of necessary diagnostic information.  The post-operative care and follow up which is done by the local staff is done very nicely.  All the patients who have already been operated on are in a very good shape for they have been followed up regularly.

As regards to the future plans of enchaining the existing partnership cooperation he said that the team would continue to encourage Eritrean medical specialists to become anesthesiologists   and cardiac surgeons. “We are planning to foster cooperation between Hanover medical university and the Ministry of Health. So we can cooperate with the education of doctors and nurses through the exchanging of knowledge,” he added.
According to Dr. Yemane Seyoum the 12 patients who underwent surgery used to be under close medical care for the last 15-16 years. The presence of these cardiac surgeons in Eritrea, however,   served two purposes.  It helped the patients to get rid of the problems they used to face which otherwise they could not normally afford. This kind of medical cooperation also enabled the Eritrean medical staff to gain experiences form the work so far carried out.

Dr. Yemane views the significance of such cooperation as a good start for the training of the stuff in medical cardiology as well as treating other heart-related diseases. He said “We have been introduced to a new technology in cardiology and there by acquiring treatment procedures. Shbine Pickel, 5th year student of Hanover medical University, who has come to Eritrea with the Heart Help group, is appreciative of the medical infrastructure-which she finds is contrary to her earlier expectations. More significantly, she said, “I learned a lot on how the Eritrean doctors and nurses manage to work with less equipment and under hard conditions.”

All the patents who under went surgeries are now free of post operation complications and are just doing well in the recovery rooms. Other patients who have been suffering from such diseases would also be treated in the same way as far as the committed local doctors and ever-willing cooperative partners work jointly for the good of the society.  The entire group expresses admiration on the nature of the Eritrea people and has just expressed its will to travel to Eritrea and help its people through knowledge transfer cherishing good memories of the hospitable and friendly people.