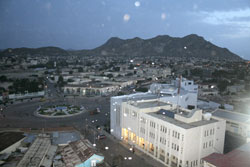 Residents of Keren town expressed admiration to the ongoing infrastructure and engineering works in different parts of the town.

Keren, 24 January 2011 – Residents of Keren town expressed admiration to the ongoing infrastructure and engineering works in different parts of the town.

They explained that a number of residents have been living in places out of master plan, which in turn resulted in the deprivation of social services. The putting in place of infrastructure facilities in such areas would now enable them to have access to social services, they added. Noting that previously they used to encounter severe problem to obtain potable water supply and transport service, the residents stated that such problems have now begun to be alleviated thanks to the infrastructure development project.

The Administrator of the town, Mr. Tekie Keleta, pointed out that the task is essentially aimed at improving the people’s living standard and reinforcing the modernization of the town.

The director general of infrastructure development department in Anseba region, Mr. Gebru Haile, said on his part that although Keren has a master plan that was mapped out in 1958, a number of houses were constructed in violation of the master plan. At present, however, basic infrastructure facilities are being put in place, including the construction of major roads, renovation of sewage canals and the like.

In this connection, he emphasized the significance of the project in promoting economic growth and modernization of the town. The projects being implemented in special design of master plan would serve as steppingstone for greater engineering works and enhancing Keren’s  charm.