Keren: Morphing Into A Modern City 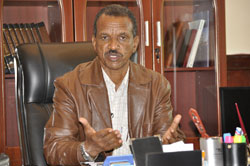 Located 91km northwest of Asmara, Keren is one of the major towns in Eritrea. Keren, the capital of Anseba region, is endowed with attractive historical sites and possesses fertile farmlands suitable for cultivating fruits and vegetables. Its climate is influenced by the mountainous topography dominating the area. In addition to its natural beauty, the modernization process adds charm to the town’s general disposition. Various infrastructure facilities and social services have been put in place over the past 19 years at huge expenditure. This developmental endeavors are part of the Government’s principle to improve the living standard of citizens on the basis of internal capacity.  Shabait conducted an interview with the Administrator of Keren, Mr. Tekie Keleta, regarding the on-going development programs there. Excerpts follow:
Tell us how the development projects in the town are progressing?

In spite of the master plan of the town that was drafted in 1958, infrastructure facilities were underdeveloped and many houses were constructed in violation of this plan at the time of independence. Hence, research was conducted to draft a new master plan to push the town in to the path of modernization. A number of projects have been carried out including expansion of narrow roads, construction of new ones, renovation and construction of sewage canals last year. The implementation of the development projects is bringing about improvement in the residents’ standard of living and adding charm to the already picturesque town.

What about the expansion of social services in the town?

The basic necessities have been put in place over the past years. So far, a referral hospital, five health stations, pharmacies and the complimentary skilled manpower have been made available to ensure efficient healthcare services. Besides, the number of schools has increased from 20 to 53, in addition to raising the number of students from 9,000 to 27,000. Moreover, access to potable water supply has been made easier, though strenuous efforts are underway to totally overcome shortage of water supply. Also, social services establishments have shown significant growth both in terms of number and distribution.

Likewise, the inhabitants have access to telephone services and electricity supply. Furthermore, the renovation of banking system as well as the provision of micro-credit and saving scheme is playing crucial role in extending assistance to citizens to become self-supporting by enabling them to engage in small-scale business ventures.

Furthermore, sanitation campaigns are carried out to maintain environmental hygiene and thereby prevent the spread of communicable disease.

Keren is known for its historical sites, what efforts have been made to promote tourism?

Indeed, the town is blessed with spectacular scenery along with historical sites, unique art-deco buildings and religious sites. Local and foreign tourists come to visit ancient sites and take part in religious festivities every year. The Administration in collaboration with the Ministry of Tourism and other partners is striving to preserve tourist attraction sites and create viable environment for the development of the tourism sector. The establishment of social service-rendering institutions and expansion of facilities on its part is making due contribution in the growth of tourism.

Can you tell us about some of the plans outlined to be implemented this year?

Development projects commenced in previous years would be continued in reinforced manner including construction of roads, building check-dams, upgrading information system, renovation of sewage canals and intensifying popular sanitation campaigns. Plans are also underway to distribute over 500 land plots for residential purposes in Shefshefit and Katsietai administrative areas in the town in a bid to ease housing problems resulting from population growth.

Any message you want to forward?

All the social services are provided for the well-being of the public and we are convinced that their participation would further add impetus in achieving the desired goals.