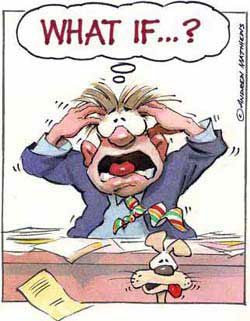 Whether we do it consciously or not, we do worry about many things and sometimes not worrying is considered as being irresponsible. We might worry about the past, and the future, what people will think of us, whether we are successful or what will happen to us. Often we go to the extent of worrying about the things that have the probability of never happening: still we worry especially about the future and ask the unanswerable question, “what will happen in future?” Many may agree that the main reason people worry about their future is simply due to the uncertainty the future holds.

Despite the preparations we make for the dangers we know: there are many more unexpected dangers, which make life hard and unpredictable. Bad experiences that seem to happen to all kinds of people, and inability to control the future are also factors that make us worry about the future. Many of us have witnessed doctors get sick, financial experts lose money in the stock market, policemen get robbed, lawyers get sued, and witness many other things happen to the least expected people. Moreover, these experiences make us wonder what will happen to us in the future and worry and unfortunately, once we start to worry, we cannot come over it easily.

The control we have in our life to protect ourselves from any kind of harm, and the ability to decide the route of life we take makes us worry about the future. We have no control what so ever regarding the life we might lead, and how and when to protect ourselves from harm. Losing control is one’s life is also another key factor for worrying about the future. What we really need in such conditions is something that will allow us to have peace in the midst of uncertainty and face reality with out being consumed by worry or anxiety. Here, it doesn’t mean that we should stop caring or preparing ourselves for the future, rather we can still prepare for the future without going to the extreme of worrying without doing anything and fretting about things.

Soren Kierkegaard wrote a psychological study titled The Concept of Anxiety, in which he defined anxiety as the possibility of freedom – to choose.  Yet, we have the doubt of making the wrong choic

e? Because for many of us, what we fear is losing freedom, losing control, or being overtaken and threatened by adverse circumstances, by events that affect our well being.

According to various writers and psychologists the best solution for overcoming anxiety or worry is the concept of living one day at a time. Instead of worrying about what will come and what has already happened, treasure the time we have at hand. And every time the anxiety of the future floods our mind we need to shift back to the present and focus all our attention to the present. If you can full-fill each 24 hours 1,440 minutes and 86,400 seconds then you would not even have the time to worry about other things. And once you have dealt with today, you will deal with whatever comes the next week, month or year.

We also need to remember that no one can predict the future and despite all the preparations there is the possibility that a million things can go wrong.

Though there are people that try to avoid worrying by pretending or putting on blinders, avoiding the issue and refusing to acknowledge the possibility of anything going on is wrong. People who will say: “If I would have known that this would happen, I could deal with it” and sing the song “Don’t worry, be happy” but pretending doesn’t push away the anxiety button. If we believe that we can face what life has put on our plate for each day, then that is when we start to overcome anxiety. And try to implement the saying that tomorrow is mystery while yesterday is history but today is a gift that needs to be treasured and that is why it is called the present.

Toys for Healthy Development of Children

Keren: Morphing Into A Modern City