Toys for Healthy Development of Children 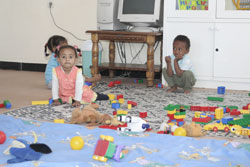 Teaching aids and toys provide a channel in creating enjoyable and enthusiastic games while being critical for children’s early cognitive development. Such educational toys enhance children’s recognizing abilities in a number of ways. Toys simultaneously serve the purposes of entertaining and educating children in a gentler manner. Manufacturing toys of varied kinds locally, therefore, makes it easier for children to learn about their environment, natural resources, as well as traditions and practices enthusiastically while they are engaged in their play.

It can be said that a more constructive way of teaching children is through coupling playthings with educational contents. Providing the necessary equipment enables young minds learn patience and helps them know facts and numbers.

Godaif Toy Manufacturing Workshop was first founded during the armed struggle period, which then used to modify and produce varied objects and utensils that were substantially useful for daily activities of the freedom fighters and civilians as well as producing office furniture.  The workshop later on shifted its activities to manufacturing toys for children.

Manufacturing toys may seem trivial, however since imported toys do not reflect the cultural make up of the Eritrean society, the availability of this workshop has tremendous importance in accustoming children with their respective customs and traditions as well as their geographical settings. That is why Mr. Habtu Weldeghebriel, manager of the Godaif Toy Manufacturing Workshop, said that Eritreans in diaspora are their major customers as they seek to teach their children about their country’s cultural make up through the toys’ representation of the nine ethnic groups. Since they consider the toys as cultural icons in terms of skin color, the way they dress and view them as good portraits of the different kinds of hair braiding styles they have been purchasing them in a great numbers.

Modern preschool education is usually supported with educational toys that allow children to realize how things work and stimulate creativity and develop varied skills through the practices of joining construction sets, building blocks, solving puzzles, learning mathematics through the abacus- counting device- without making them think they are being taught.

The workshop has been producing toys for kindergartens for some time now.  Such toys could play due role in exercising the imagination of preschool-aged children  and preparing them for school and familiarizing them with

other social and geographical settings.  The toys workshop that functions under the Ministry of Labor and Human Welfare was established in 1992 within the premises of the Asmara Orphanage.  The opening of this toy workshop in such a location creates opportunities that are critical for a healthy development of children in which they learn how to solve problems and develop more skills of substantial importance when learning through play.

All kindergartens throughout the country are now using locally made toys that represent the cultural diversity of Eritrea.  Of the toys that have been produced in the workshop include toy trucks and cars, construction equipment, blocks and building sets, maps, puzzle images of domestic, wild, and marine animals as well as of varied colorful gear, all of which are made up of highly durable materials. “Since partners who have been collaborating with us have approved the quality of the toys, instead of importing we are now manufacturing toys of different kinds locally,” Mr. Habtu said.

A government with a strong  conviction of  building a bright future for children plans ahead to create a viable ground to nurturing morally and emotionally healthy children. As was very essential to share experiences from an institution that is involved in toys manufacturing, Mr. Habtu said: “In August 1991- three months after independence- we had an opportunity to gain experiences for about 8 months in Sudan regarding technical aspects of toys manufacturing and children’s early cognitive development.”

Pointing out that the government has established the toys manufacturing workshop to provide cost effective and long lasting toys, Mr. Habtu stated that they are  now equipped with the required expertise and are  also looking forward to further expand the workshop and boost production.

Taking in to account that the toys manufacturing center has been producing toys that portray the real cultural and geographical setting of the country, Eritrean children would be exposed to learning their culture and indetity in fun and exciting ways.