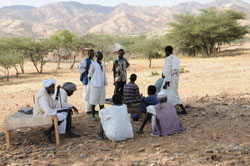 The environment people live in and their day to day activities are factors that direct one’s life style and those daily routines become traditions of that particular society with time.  These activities or traditions also develop to become cultural practices and beliefs through time and repeated practice. Cultural practices and traditions are the identity of the society and they also represent the civilization of the indigenous society.

The Nara and Kunama ethnic groups have different beats of the traditional drum, Kebero. The beats used for wedding, funeral, and beats used at the times of attack or war vary, and any one who hears the drum knows what the event is about from the beats.

Although all the ethnic groups in the country have their own traditional justice system, the process differs in each ethnic group. Among the Nara ethnic group the justice system has units similar to the present legislative, judiciary and executive units. Anyone who commits a crime goes to a sanctuary to protect him/herself from retaliation. This place of sanctuary is called “Kasigino or Asab Wolla”. Any criminal who reach this house of sanctuary, is like he/she is in custody and stays there till he is proven guilty according to verdict from the traditional judiciary system. The traditional judiciary system is called “Buta”; any one who violates the rules of the society is punished and judged by

this system.  “Buta” is practiced in big cultural celebrations, but the process is not allowed to be recorded in any form and taking pictures of the process are forbidden.

The Nara also have their own traditional administrative system, and this administrative system has five levels where each level has its own task and responsibility.  The five levels of the administration investigate a case according to the type of the case in respect to their power and then the final decision is made through “Buta”. The decision or verdict passed by “Buta” is final and binding even an appeal is not accepted. Another big judicial system in the Nara is “Kati Hafo”. This is a process where the charged individual confesses his crimes in front of the public once the case is presented to ”Buta” and a verdict is passed. It is also a process of forgiveness.