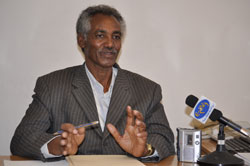 He indicated that the Laboratory which is the only one in the African continent continues to give priority to nationals suffering from cataract. Over 82% of its products are exported to countries in Asia, the Far East, Vietnam, Australia and Europe, while 12% is exported to African countries, Mr. Mengisteab explained.

Noting that the Laboratory used to produce only about 30,000 intraocular lenses in 1995 annually, he pointed out that it is currently producing about 200,000 similar lenses per year to satisfy the year-to-year growing demands.  Mr. Mengisteab further stated that IOL has the capacity of producing still best products both in terms of quality and quantity, provided new equipments are introduced.

Indicating that over 1.6 million intraocular lenses were supplied to the market over the past years, the manager underscored that initiatives are being taken to introduce new equipments towards producing flexible lenses. The necessary study has also been finalized to produce eye drop in the Laboratory, he added.

It is to be noted that the Fred Hollows Intraocular Laboratory (IOL) was established by an association set up by an Australian Ophthalmologist, Prof. Fred Hollows, who was friend of Eritrea since the days of the armed struggle for independence. At present, the Laboratory is self-reliant and is administered under the umbrella of the Ministry of Health.

Inhabitants of Abo and Kiloma get access to mobile phone service