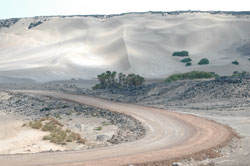 Early in the morning of 11 January 2011 the tour participants headed south from Assab to the ancient village of Rahaita to meet Derder (Sultan) Abdel Kadir Dawud and the people of Rahaita to learn what the Sultanate was all about and to observe the remains of the history of the ancient Sultanate. Derder Abdel Kadir Dawud is the sixteenth Sultan in the ranks of the Rahaita Sultanate.The Sultanate of Rahaita is said to be of 800 years old. From the renowned Kingdom of Adal established in Rahaita, the kingdoms of Dankali and Ankala, the Sultanate of Bidu and other major clan chieftains and sheikdoms successively dominated the traditional administration on the Red Sea coasts, in the interiors and on the islands as well.

Since the 16th century, the Ottoman Turks had controlled the Red Sea Afar coastal areas with a minimal influence over the territories. The Ottoman rule transferred its nominal authority over the coasts and islands of the Red Sea to the Egyptian Khedive in 1866 but didn’t last long. It was after only three years, on 15 November 1869, that among the Afar chiefs, as we mentioned in the first part of this article, that Sultan Ibrahim Ahmed and Sultan Hassan Ahmed signed an agreement with Giuseppe Sapetto, representative of Societa Rubattino Company in which the future colony Eritrea was first conceived as the piece of land in Assab possessed by the Italian company. Soon afterwards, on 10 March 1882, the Rubattino Company transferred all its landholdings to the Italian government. During all these years of successive occupationthe Sultanate of Rahaita was intact, respected and observed by the society. The Rahaita Sultanate is one of the four Sultanates in Afar territory. The Afar territory was divided into four sultanates and numerous tribal confederacies that independently ruled and administered themselves.

Among the four Afar Sultanates are that of Girifo and Rahaita which are found in today Eritrea the other are in neighboring countries. All these Sultanates or mini-kingdoms had their way of administration and societal laws and norms. Among all the Sultanates the Sultan of Rahaita was very powerful and the others expect and rely on his advice. The Sultanate of Rahaita as ancient as it is has a lot of evidences confirming its old and resounding history, some buried and others on the ground, revealing their old age and the power and influence the Sultanate of Rahaita had on the people. The Sultanate was powerful that it did not give up to whoever power came as a colonizer. What the Sultanate says and orders was and is respected by the people. The old village of Rahaita believed to be the ancient residence of the kingdom is buried underground eagerly waiting for historians and archeologists to uncover it, conduct research on it and reveal the mystery it is holding to the wider world.

Still visible on the ground are the ancient sesame oil mill processing plant. The oil is processed by grinding wet sesame by heavy rounded and specially prepared rock rotating the rock with the help of an elephant. The drops from the grind sesame produce edible oil believed to be free of fat. The remains of the mill are found scattered on the ground. A special container like for processing fodder food for animals, cement processing from corals and ancient water wells and the burial place of a Turkish man, evidence for the presence of Turks in the area, are some that are still visible ancient historical sites in the village. The very interesting part of the history of Rahaita and its kingdom is that of the organization of the youth. In those ancient times the youth were organized with different categories. They call it Fiema (Youth Organization). The youth are organized into the different units.

The Fiema Abba is the overall leader of the organization responsible for the Derder. Eebo the leader of the youth army, Fiema Taba front runners, Reebusa cover givers to the Fiema Taba, Gumageel logistic and Gumagaris executioners of what ever decision made by the Fiema.  Every youth has to go through this different youth unoits and not abiding by the rules of the Fiema is punishable by the rule of that organization and that of the Sultanate. So it is an obligation of every youth. In present day Rahaita the Fiema still exists with modified structure to fit with the modern day situation. Fiema today is more concerned about social obligations such as serving the society in different capacities and participating in development programs. And every youth should be part of one of the units of the organization and refusal or disobedience has its consequences. At the residence of the Sultan there are two drums, big and small ones. The bigger one represents the Derder while the smaller one represents the Banoyta.

Every year new drums are prepared and both the Sultan and the Banoyta put their hand prints on the drums as a sign of their allegiance to the society. The drum of the Sultan sounds every day at 3:30 PM to announce the time for Salat (Prayer). If it sounds at a different time it is a call for emergency and every one rushes to the residence of the Sultan to hear and learn on what is going on and take the necessary assignment that the Sultan might give them. The ancient bed of the Sultans is another item of interest for visitors. The respect for the Sultan the people have is very strong that every order or assignment he gives is well observed and executed. Conflicts among the society are settled within themselves. The final conflict resolution is sent to the Derder for signature that would make the settlement final and binding.

A person who commits the highest crime, killing a person, and runs for safety to the residence of the Derder is assured for his safety from the revenge the immediate family members of the victim might take on him. He gets a fair trial and the problem is settled by a jury assigned by the Derder. And every concerned individual or group has to respect the ruling of the jury immediately after it issigned by the Derder.  Nearby the village of Rahaita stands the strategic location of Ras Dumera. Ras Dumera is on the top of the strategic shipping line of Bab-el-Mendab. The Italians noticing its strategic location used the place for controlling ships passing through the strait. The remains of a big telescope like instrument for observing every passing ship is still standing atop the hill facing the vast sea that takes to Bab-el-Mendab. The group upon arrival to the village of Rahaita was warmly welcomed by Derder Abdul Kadir Dawud, Banoyta (Successor) Abdu Abubeker and the villagers. The hospitality awarded to the group by the Derder and the people of Rahaita was the first impression for the group on how loving and generous the people of Afar are. They provide every thing they have to visitors and this is one major asset of hospitality of the Eritrean people.

Securing Clean and Efficient Water Supply Services For All