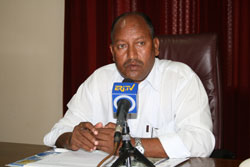 He pointed out that 14 committees have been set up to effectively organize the program with the active participation of the people and members of the Defense Force. Various programs, including exhibitions, cultural shows and public parade, as well as different activities staged by the agitation and information center of the Defense Ministry would also take place.

Recitals regarding the historic Operation Salina and seminars on bequeathing historical legacy to youths, as well as sports competitions among the disabled are also some of the programs to be featured in the course of the commemorative event.

Mr. Hamid further noted that camel racing, half-marathon race, sea sports, traditional sports and the like have also been organized to give color to the celebrations.

In another report, fighter Leul Beyin is traveling on foot from Omhajer to Massawa in connection with the 21st anniversary of Operation Fenkil.

He told ERINA on arrival here in Asmara after a 13-day journey on foot from Omhajer that such a journey is aimed at expressing renewed commitment to honor the trust of fallen heroes. Fighter Leul further stressed the deep moral satisfaction one gets from honoring the trust of martyrs.

He went on to say that he has been making similar journey on foot over the past years on the occasion of Martyrs Day, and that such moral satisfaction prompted him to undertake the current voyage. Fighter Leul expressed appreciation to the collaboration and encouragement the public extended to him while crossing various towns and villages.

Education: an Invaluable Resource of a Society