Securing Clean and Efficient Water Supply Services For All 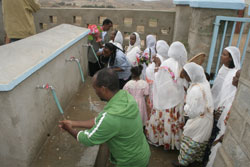 Besides symbolizing life, water affects all human activity. Availability of water sources in the first hand and improved water sanitation on the other, highly affect people’s living standards; be it on the health sector or rather on economic development of any sort. The provision of secure potable water supply in urban areas and particularly in the rural areas results to an immediate all-rounded transformation in significant number of people. Hence, Eritrea has been prioritizing the construction of water reservoirs and has also been working on securing efficient water supply throughout the county.

Development of any kind is dependent on sustainable water sources. Bearing this in mind, many water projects that prioritize the rural areas of the country have been implemented each year. The rainy seasons of 2010 have positively impacted the level of ground and surface water sources and particularly in the western escarpments. Many water embankments have now reserved good amount of water, which in turn are expected to raise the availability of water that would be utilized in agriculture, industrial activities, and most significantly in boosting the availability of potable water supply in great amount.

River streams measurement equipments have been installed in many areas that have been selected for the establishment of water reservoirs of varied sizes including places such as Asila, Nakfa, Kerkebet and Dekilefay. Likewise, studies were conducted on the foundations of water reservoirs and tributaries of Deki-Lefay in the Southern Region, Kerkebet in the Gashbarka, Moga’e and Nakfa in the Northern Red Sea region.  Studies on the amount of groundwater sources were also undertaken in seven villages of the Gash-Barka region, five villages of the Central region, and two villages of the Southern region.

Geo-physical surveys that have been conducted in all of the aforementioned areas and in Mereb river as well in Aligider- one of the richest agricultural sites of the country – are aimed at boosting the amount of water supply that would pave a way  towards securing water supply for varied domestic, agricultural, and  industrial demands as well as ecological stability. As part of ensuring sustainable water supply for industrial purposes, preliminary study on the amount of groundwater resources for Adisogdo food processing factory was conducted.

Besides securing its provision, ensuring hygiene of water supply sources in general and of potable water supply in particular is imperative in preserving the ecosystem and most importantly in keeping societal health intact. Investing in water supply projects is therefore, investing on diversified sectors such as: health, agriculture, construction and other developmental programs.

It is to be noted that many community-based water supply projects have been put in place each year. The communities have also been trained on sanitation and judicious water utilization. The primary aim of such community owned water projects has been to instigate sense of belongingness and to raise awareness on the prevention of diseases that could arise due to contamination of water sources which subsequently would result in dire health conditions. Apart from what has been mentioned, the department of water resources of the ministry of land, water and environment has conducted random laboratory tests on sample waters taken from the six regions to check whether  the water sources are free from chemical hazards.

According to the reports of water resources department, rural water projects worth more than 96 million Nakfa were implemented last year in different parts of Eritrea.  As part of enhancing water supply in the growing urban areas, about 60 water supply stations were established and pipelines were also installed last year in Tessenei. The department has also published and distributed middle and long-term strategies of integrated water management system. Action plan for the years 2011-2015 have already been finalized. Members of the department have also received local and international trainings that include trainings on climate change, geophysics, water provision and sanitation in schools, studies on hydrology of the upper Mereb among others. All these are aimed at providing safe water that meets international standards.

Merging of the Three Forces