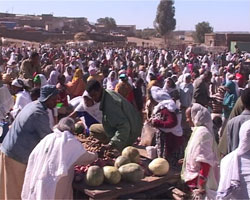 According to ERINA market research, a kilo of onion is being sold 12-13 Nakfa, tomatoes from 14-16 Nakfa, carrot 7-12 Nakfa, potato 18-22 Nakfa at the  Enda-Silasie market center, while tomato and onion have been sold at 8 Nakfa per kilo at Godaif marketplace and potato at 20 Nakfa.

The beneficiaries stated that the initiative taken is part of the ongoing endeavors to improve the people’s standard of living, and that the newly created atmosphere would enable them to obtain fresh fruits and vegetables of their choice.

The producers said on their part that they would now manage to sell their products in few hours thanks to the opening of market centers for producer-consumer direct interaction.

The head of the Ministry of Trade and Industry branch in the region, Mr. Yohannes Melake, pointed out that sufficient supply of fruits and vegetables have been created as farmers directly get involved in the market, which in turn leads to significant price reduction. Efforts are also underway to effectively organize the centers for still much better outcome, he asserted.