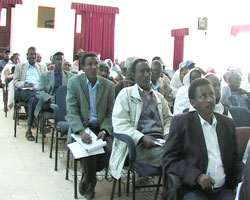 The Southern Region Assembly held its 10th regular meeting on February 4 under the theme: “Investment In Development: Promising Future”.

In a speech he delivered at the occasion, the Chairperson of the Assembly, Mr. Woldai Gebre underscored the paramount importance of public and Assembly’s contribution in adding impetus for more gratifying outcome of the Government’s huge investments in the implementation of development, infrastructure and social programs.

Following the extensive discussions they conducted, members of the Assembly noted that continuous campaigns would be held to further strengthen the culture of community-based reconciliations. They also called on the farming community to make the necessary preparations before the onset of the rainy season, and regulate reckless cutting of trees in their area.

The Administrator of the region, Mr. Mustafa Nurhusen, on his part stated that some of the programs outlined to be implemented this year include installation of electricity supply to semi-urban centers and villages, land leveling, and distributing select seeds as well as fish breeding in micro-dams. He went on to say that the construction of 21 schools, two health stations, water supply projects and agricultural activities are underway at a cost of over 431 million Nakfa.

The Southern Region Assembly also adopted a number of resolutions and recommendations comprising of carrying out sanitation campaigns, developing sport activities for females and land allotment.