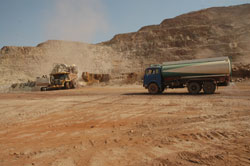 Eritrea’s astute and conducive investment policies have attracted the influx a number of foreign mining companies. As an outcome of the collective work that was accomplished in previous years, the year 2010 was a turning point in the country’s mining sector.  In 2010, various new companies were licensed to work in Eritrea, increasing the number of mining companies to 20, of which most are working in exploration and excavation.

Mining activities are gaining momentum each year; some of the companies that have been engaged in exploration have now started excavation.  The major accomplishment in 2010 was that, after two years of intense infrastructure development, the Bisha Mining company has processed the first phase of gold production.  All mining equipments have already been made ready to excavate and further process the minerals.

According to reports of the Ministry of Energy and Mining intensive activities have been carried out in the mining sector. Also among the major achievements of 2010 is that a number of assisted geophysical studies were conducted in many sites of the western part of the country.  Such geophysical studies are expected to enrich the database of many prospective mining areas to be explored the same as that of Bisha’s and Zara.
“As part of the concerted actions that have been taken on information gathering with the collaboration of Eritrean and Chinese geological survey, this year, studies that stretch from Adikeih area to Erafaile are underway,” Alem Kibreab, the Director General of department of mining said.

Eritrea’s mining polices maintain that mineral resources are public properties; the government has the responsibility of administering them in a way that keeps the environment

intact and in a manner that benefit the general public. The government also works thoroughly to build local capacity in the mining sector.Conducting mining activities based solely on local resources is very demanding and impractical. From this viewpoint, the government of Eritrea has been inviting foreign investors who would work on the basis of mutual cooperation. Eritrea is very rich in construction and industrial minerals such as marble and granite. Prospects of producing cement and other construction materials using local minerals are very high. Such resources would also attract many foreign investors.

This year plans are underway to further expand mining activities in Zara which is a relatively smaller area than that of Bisha’s in terms of type and amount of mineral deposits. Zara’s mine deposit is limited to gold where as in Bisha gold, copper, and zinc would be excavated in abundance.  So far feasibility study of Zara site has been finalized, gold would be mined, and following to putting in place the required infrastructure in 2011, it is expected to process gold in late 2012 or early 2013.

Studies are being conducted in other sites around Asmara, Dubarwa, as well as other new sites in the Northern Red Sea region around Kolili area, which has already shown good prospects of potash deposit.

Q&A With The Administrator Of The Port City of Massawa, Ms. Fana Tesfamariam