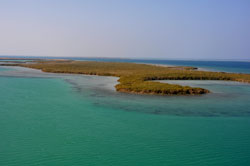 Name a village in Eritrea and I can assure you it has an access to road. The road might be rough or eroded and difficult to drive through because of rain or otherwise but the village has a road that connects it with other villages, towns or cities. The Southern Red Sea region whose topography includes sandy plains and mountains every village irrespective of its location is reachable by road. That is what the tour participants to the Southern Red Sea region experienced during their third day tour to Maebele and Siroru and for that matter during their previous tour to the Debub and Northern Red Sea regions.

That is the vivid testimony for the rigorous endeavor the government is exerting to provide the people living in remote places access to modern day life. As roads are essential for multi faceted developmental activities in any place, the road that links Maebele and far with Siroru has brought a lot of tangible change to the lives of the people. New schools, clinics and water reservoirs are already in place. Any one who happens to think about the Southern Red Sea region he/she might think of the sea, the sand and the melting climate. However, the region holds mountains as high as 1890 meters and forests. When the tour participants reach Maebele many were surprised to fi nd variety of trees that they expect are only found in the highlands of the country. The climate is also temperate and very comfortable to live through out the year.

Maebele and Siroru are located far from the sea and the livelihood of the people depends on farming and herding. The people in the area do not seem they have ever seen the sea and they depend from goats and camels for

their living. Trees are well protected and we heard from the locals that they are distributed to individual farmers and the farmers take the responsibility for the protection of the trees. Each tree is owned by some one and that person depends from the tree he owns to feed his animals. Maebele, though historians have to go there explore the inscription and verify, is a historical place. The rock inscriptions in Sabean language found in the area are indication for people from the other side of the sea have been there. No body until to date exactly knows what the people were and where they were heading to. The inscriptions are there scattered on the ground waiting for research and disclosed their history. There are also ancient cemeteries with Sabean inscriptions in the area.

According to an elderly from the village, there were also books written in Sabean language. The man, however, does not know where the ancient books are now. The recover of the books might help a lot in terms of identifying the early people of the area. The rock inscriptions and the books are evidences that the area was frequented by people before the introduction of Islamism in the region. As in other parts of the region Maebele and its surrounding have also been victims of Tigrian invasion. The war lords of Tigray used to invade the area to ransack animals and every thing they find in their way. And in Maebele there is an underground where the people used to hide their animals and property from the Tigrian invaders. Siroru is also another wander in the Southern Rea Sea region. In the middle of the big mountain there are around six holes that gust hot water vapors into the air. Water vapor is the most abundant gas of volcanic plume released into the atmosphere from the active volcanic system. The vapor is genetically and territorially associated with existing active volcanoes. This depends upon the character and degree of activity of the volcanic force. The white ash found nearby the wholes is an indication for the eruption of volcano in the area in recent years. The existing water vapor in the area is also the result of process, which is in progress now and in the near future-surface zone of the crust. Only during the period of eruption vapors and gases more or less reflecting the original composition of volcanic emanations are penetrating into the atmosphere. Water vapor from the middle of the mountain is a good destination for visitors and, who knows, for people with some ailments curable by the hot natural vapor. The last site the tour participants visited during the evening hours of the third day was Ila Seduha (three water wells). This place has an important place in the history of the armed struggle for Eritrean independence. It was in Seduha that the first combat was conducted between the liberation fighters and the Ethiopian occupation forces in 1968. Important meetings for unity among the liberation fighters in the early days of the struggle was also being conducted here at Ila Seduha.