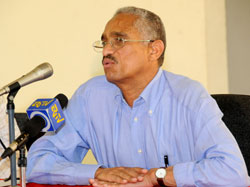 A seminar focusing on Eritrea’s diplomatic journey was conducted in Massawa in connection with Operation Fenkil anniversary.

Massawa, 11 February 2011 – A seminar focusing on Eritrea’s diplomatic journey was conducted in Massawa in connection with Operation Fenkil anniversary.

In briefings he gave, the head of Desks in the Foreign Ministry, Ambassador Fisehatsion Petros, said that the Eritrean people mounted resolute rebuff against the unjust sanctions resolution, which in turn prompted the international community to raise questions about the issue.

He explained that enemy quarters who don’t wish to see Eritrea pursue its own political and economic path since the achievement of independence weave various conspiracies to impede such a correct course that ended in utter failure. In this respect, Ambassador Fisehatsion called on every national to remain vigilant in rebuffing possible reckless acts resulting from their frustration.

Noting that psychological warfare constitutes a mere tool employed to promote their vested interests, he stressed the need for raising the consciousness of the youth. He also highlighted the need for every generation to properly utilize resources in a manner that takes into account future generations. Ambassador Fisehatsion pointed out that concerted action is being taken to establish diplomatic ties that give priority to the benefit of the people and the nation, and that encouraging outcome is being registered to this end.

The participants of the seminar emphasized the significance of such seminars in obtaining timely information and raising awareness, and that they should be enhanced.

A Glorious History that Bestowed Dignity