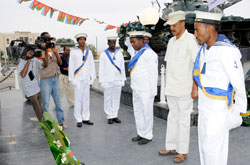 President Isaias Afwerki in the morning hours today laid wreath at the Tiwalet Martyrs’ Monument in connection with the 21st anniversary of Operation Fenkil.

Massawa, 12 February 2011 – President Isaias Afwerki in the morning hours today laid wreath at the Tiwalet Martyrs’ Monument in connection with the 21st anniversary of Operation Fenkil.

The Secretary of the PFDJ, Mr. Al-Amin Mohammed Seid, the Minister of Defense, Gen. Sebhat Ephrem, the Chairperson of NUEW, Ms. Leul Gebreab, and the Administrator of the Northern Red Sea region, Ms. Tsegereda Woldegergish, as well as the Administrator of Massawa city, Ms. Fana Tesfamariam, also laid wreath at the Monument.

Meanwhile, an arts show was staged last night under the topic: “Fenkil in the Eyes of Artists,” as part of the ongoing commemorative events.

In the show in which President Isaias, ministers, senior government and PFDJ officials, as well as invited guests took part, various performances highlighting the heroic feats demonstrated in Operation Fenkil and the implementation of development programs were featured.

The participants of the show said that the arts presentation was rich in content and expressed deep impression with the fact that the Eritrean people not only achieved independence through paying heavy sacrifices but also managed to stand on higher ground through overcoming trying challenges.

Various activities are being carried out in the course of the commemorative events from February 11 to 13.

A Glorious History that Bestowed Dignity