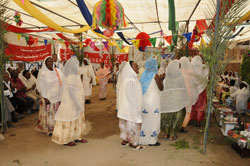 The 3-day commemorative events of the 21st anniversary of Operation Fenkil concluded yesterday in a patriotic spirit.

Massawa, 14 February 2011 – The 3-day commemorative events of the 21st anniversary of Operation Fenkil concluded yesterday in a patriotic spirit.

In the commemoration in which tens of thousands of nationals and foreigners took part, various programs were staged, including arts exhibition portraying the two faces of Massawa i.e. the damage sustained and reconstruction tasks,  recital on the historic Operation Salina of 1977, various sports and artistic activities, laying of wreath at Tiwalet Martyrs’ Monument, community tents and others.

Participants of the commemoration expressed deep impression with the programs featured and said that the event reminds all nationals to renew the pledge of honoring the trust of martyrs. In this respect, they expressed conviction that the port city of Massawa would indeed be the gateway for national development and prosperity in the same way it paved the way for total liberation.

Foreigners who took part in the event expressed admiration to the efficient organization and variety of programs. They further stated that they came to learn that the commemoration of Operation Fenkil bears profound meaning among Eritreans.

In a speech he delivered during the official commemoration of the event, President Isaias Afwerki underscored that the port city not only paved the way for total liberation but would also become the hub of investment for national development, as well as regional and international trade and investment, thus symbolizing the mark of our pledge and progress. He further pointed out that the nation stands on higher ground for coping with future challenges as it has already acquired valuable experience and capacity over the past 21 years. In this respect, the President stressed the need for keeping vigilance and reinforcing endeavors towards registering still more gratifying accomplishments.

The commemorative events concluded with the awarding of prizes to those who demonstrated excellence in various competitions.