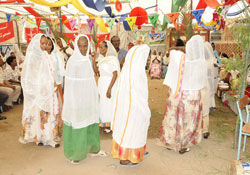 The three-day celebration event of the 21st anniversary of Operation Fenkil under the theme “Fenkil: Apiary of Eritrean Independence” was conducted in vivid patriotic spirit. The celebrations began in Salina with a minute of silence in memory of martyrs. Beginning the commemorative event at a place that embraces the history of valiant freedom fighters by itself conveys a special meaning. It is a place where gallant compatriots lost their lives to capture Massawa. A drama depicting the bitter battle fought there, songs and poems attributing to the event as well as a testimony by veteran female EPLF fighter, Ti’be Russom, who participated in the war were presented in the morning hours of Friday, 11 February.

Then an art exhibition at the environs of Sigalet was officially opened by Mr. Al-Amin Mohammed Seid, Secretary of the PFDJ. The display presented by over 21 institutions in the port city of Massawa and artistic work highlighting the Operation Fenkil were presented in five different tents. This was intended to familiarize the activities of the institutions and achievements being registered in modernizing the port city to the pilgrims. The art exhibition portraying the struggle and people’s struggle at that time was showcased to present Massawa’s history to the new young generation.

Operation Fenkil in the eyes of authors was one of the commemorative event’s programs conducted in the evening hours at the Red Sea Hotel. Songs and poems in various Eritrean languages, short film as well as a song by Sudanese singer were presented.

The next day, Saturday, President Isaias Afwerki and other government officials laid wreaths on martyrs’ monument.

In a speech he delivered in the official celebration, President Isaias Afwerki, underscored that Fenkil occupies a special place in the history of Eritrean patriotism, and that the nation stands on higher ground for coping with future challenges as we have already acquired valuable experience and capacity over the past 21 years. “In this juncture, let’s renew our resolve to keep vigilant and reinforce endeavors towards registering still more gratifying accomplishments,” he added.

The Administrator of the Northern Red Sea region, Ms. Tsegereda Woldegergish, on her part stated that this year’s commemoration is special as it is being held just before the 20th anniversary of Independence and the charting of future action programs. She added that the tasks undertaken to promote social justice have borne fruitful outcome.

The residents of Massawa set up tents to commemorate the day that brought freedom and paved a way for bright future. Their gathering in different places of the port city to commemorate the past is very significant to further strengthen their steadfastness and renew their pledge to build up the nation.

During the course of the celebration various sports activities comprising of traditional games and cultural concert in different places were carried out which added color to the event.

Administrator Urges Inhabitants To Make Good Use Of Water Resource