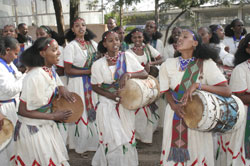 1. Negarit is a kind of drum made from either wood or metal in a semi circle shape with a diameter of 15cm. The upper and lower end of the circle is covered from animal hide with a rope in the middle to stretch the hide. “Negarit” is played with a small stick usually in religious celebrations and weddings. “Negarit” is also beaten in times of invasion or attack.

2. Kebero is a drum like traditional instrument categorized into two by the sound and task it provides as big and small. The bigger one is used by priests during church hymns and recitals. It is made from wood in circular shape with unbalanced ends. Animal hide covers the ends of “Kebero”, and the whole body is covered with a rope in order to stretch the hide. It also has a rope in the side because it is played hanging from a shoulder of a person and it beaten by the hand. The sound and beats of the “Kebero” depend on the movement of the hand and the timing the hand touches the hide.

The smaller “Kebero” is also made with the same material and shape as the bigger one except the difference in size and is used in any kind of celebrations. Some times the manufacturers put small stones or beads inside it to make deeper sounds.

4. Shambuko: is a musical instrument similar to a flute and is made either from iron or a bamboo tree.  It has eight or six holes along its length to determine the type of tune.

5. Embilta: is traditionally made from a tree called “Argezana” but it is also made from iron or any other kind of metal. “Embilta” is a 1m long tube and is played with blowing air into it. There are three types of “Embilta” , one is with one hole in it, Shanqet, the second is with out holes but is played by covering the bigger hole at the end of the tube, Debay, and the third one is with out holes and is played by rhythmically blowing air on it. All three are played at the same time and music is created by mixing the sounds coming from the three “Embiltas”. Embilta is played during all kinds of celebrations. Although not common, it is also played during funerals.

There also used to be a similar smaller instrument called “Tatula” made from either animal horn or metal played during religious celebrations especially during Epiphany and often during funeral ceremonies.

6. Meleket: is a traditional instrument similar to trumpet usually made from bamboo tree but also made from iron and is played during different celebrations.

7.Begena: is a triangular shaped musical instrument with eight to ten cords and is played by touching those cords with a finger. It is much similar to the harp.  In Eritrea, it is played in churches especially during fasting seasons. At present, this instrument is no longer used.

8. Kirar or Mesenqo : is made of boxed wood with six or five strings attached in the middle  and played by touching the strings with a finger, similar to a guitar. It is played in almost any celebrations accompanied by “Kebero” and “Chera Wata”.

9. “Chera Wata” : is diamond shaped musical instrument made from hide of a goat, horsehair and wood. It is similar to violin.  It is played when the instrument with the horsehair string touches the strings on the box. It is played in almost all occasions, previously used to be played by professionals but at present, almost every one who has the ability can play it.

These are the traditional musical instrument used by almost all the ethnic groups in the Eritrea and almost all are still functioning in the music of the country.

Fenkil Anniversary In The Eyes Of Young Eritreans

The Eruption of Civil War(Part I)