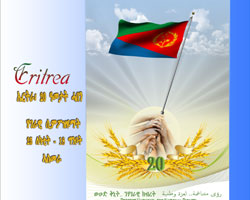 The Eritrean people and Government had very shortly after independence engaged in the reconstruction process of the nation. Without waiting for any external aid, they rolled their sleeves to build the nation from scratch through hard work. The determination to achieve socio-economic emancipation founded on lofty principles has brought about tangible outcomes in a number of domains. Thus, reviewing the achievements of the past 20 years are going to be an important part of the programs arranged to colorfully celebrate the Independence Day Anniversary. The national symposiums by the ministries and regional administrations will be held from 25 February to 18 May 2011 in different cities of the country. The Ministry of Education’s symposium is already underway starting today and will continue to the 27th of February, where three in-depth study papers will be presented. The Chairman of the National Holidays Coordinating Committee, Minister Semere Russom has given briefings regarding the symposiums. Excerpts follow:

Why is it important to hold these symposiums?

The process of reconstructing the nation and safeguarding its sovereignty was not an easy task as it demanded commitment and scarifies. Looking back how those hurdles were challenged at this point where nationals from all over the world come together to observe the 20th Independence Anniversary celebration would widen future perspectives. As a result of the achievements registered in various areas, the nation is now at a stage of a  transformation period towards a promising future. Nevertheless, we need to gear up our capacity and resources to fully attain economic emancipation and social justice goals we have outlined.

What is the primary aim of the symposiums?

We are witnessing the implementation of major development programs on the basis of internal capacity and their impact on improving the people’s lifestyle. These symposiums would highlight the all-round development endeavors in all regions, including strenuous efforts to achieve food security, expand social services and putting in place of infrastructure.
The symposiums would give a general picture of the undertaken programs, in addition to assessing strong and weak points. The public would have an opportunity to closely follow up the symposiums as they are scheduled be held in major cities of the country.

What will be the benefits of holding such symposiums?

Every citizen is looking forward to celebrate the 20th Anniversary of Independence and holding these symposiums in connection to this important event would further highlight the significance of the day. It would also widen awareness and a sense of responsibility for all to redouble contribution for more gratifying outcomes.

Tell us some of the programs included in the symposiums?

Study papers, exhibitions, panel discussion and dramas reflecting the undertaken projects and endeavors would be presented. Besides, interviews with local officials through the mass media.

What are we going to expect from the symposiums?

It has become a culture for the Eritrean society to celebrate Independence Day enthusiastically. Holding such kind of meetings for the first time would enable the society to fully grasp the on-going development projects and provide a platform to discuss future work programs.