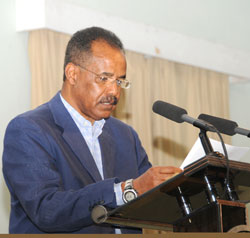 President Isaias Afwerki opened the Ministry of Education symposium today which is underway at the Expo grounds as part of the preparations to highlight the 20th Anniversary of Independence.

Asmara, 25 February 2011 – President Isaias Afwerki opened the Ministry of Education symposium today which is underway at the Expo grounds as part of the preparations to highlight the 20th Anniversary of Independence.

Speaking at the occasion, President Isaias stated that the pragmatic and realistic vision of the Eritrean government as regards education is based on the firm belief that the country’s determinant factor for peace and progress is its people and as such an effective educational infrastructure is imperative for equipping nationals with knowledge and skills. Establishing an effective educational system in both its theoretical and practical aspects is not something that can be realized through merely vision and good will but would require persistent long-term efforts and investment, the President pointed out.

Indicating that although what has been accomplished in the last 20 years might seem as great success, President Isaias stressed that the gap between what has been done and what should have been done is quite substantial considering the distribution and quality of education. “The colleges, schools, training centers and other facilities we have been able to establish so far are not up to the standard we aspire for and thus further work is required to effectively carry out the remaining tasks,” the President added.

The Minister of Education, Mr. Semere Russom, on his part stated that the symposium is aimed at implementing the vision and stance of the Government of Eritrea which is rooted in social justice as well as to highlight the major programs accomplished in the sector over the two decades. He went on to add that satisfactory achievements have been scored in assuring access and equity as well as quality and relevance of education.

Later during the symposium, President Isaias observed the exhibition reflecting the 20 years journey of the Education Ministry.
Various study papers would be presented during the course of the symposium from February 25 to 27.