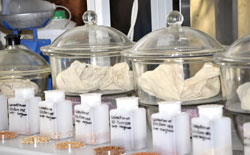 Share
Halhale Agricultural research center which was founded in 1992 has now been equipped with various research technologies to the point of meeting international standards. The research center conducts different laboratory tests and caries out field surveys in different parts of Eritrea. Its major activities include forest and wild life conservation, conducting researches on pests and weeds, soil conservation and other agriculture related laboratory tests.

The crop development unit is focused in dealing with the health of cereal grains, vegetables, fruits and other products. Hence, it has been working in preventing such plants form varied infestations that could result through diseases, insects or weeds and pose threat to the over all agricultural yield. Many of the problems that result in poor harvest may be caused by limited knowledge of farmers with respect to the severity of the consequences pests and weeds could pose. Thus the unit has been making intensive laboratory tests on the major pests and weeds that could considerably interpose agricultural out put. According to Mr. Tsegay Berhane, Director of crop development unit, the researches have been conducted through visiting agricultural fields or by collecting samples for laboratory test.

Providing selected seeds to farmers is aimed at boosting agricultural production through the implementation of material-based techniques.

Halhale research center’s branch of natural resources deals with addressing challenges and conservation activities. Its major units include gene bank for natural vegetation, and other units that are associated with forest and wild life conservation, land cultivation along water shades and also soil conservation activities. This unit functions on almost every agro-ecological zones of the country. Its branch offices throughout the country have been engaged in conducting different agriculture related researches. The center in Halhale, conduct researches in the highlands. Other branches are centered in Golij, Shambuko, and recently opened centers in Fanko, Gherset, and Akordet in the Gash-Barka region as well as in She’eb in the eastern lowland of Eritrea.

After conducting preliminary evaluations, the center shares findings to sister collages so that they can carry out laboratory tests. For instance, recently the center conducted researches on 147 wheat species so as to sort out the best ones for pasta as well as for bread. This year, for the first time the center issued a publication for the use of the indigenous vegetations.

The research unit for the genetic resources regularly conducts surveys throughout the country and collects as much vegetation for preliminary laboratory tests and preserves them in a gene bank  for five to twenty years.
The soil conservation unit on its part conducts studies on soil texture. Each year sample soils are collected for laboratory tests from different parts of the country. In the 2010 around 950 soil samples were tested in the laboratory, and the findings have been distributed to farmers who are engaged in extensive agricultural activities. Likewise, around 5,000 hectares of farm lands have been surveyed in Hazemo. The same process has been carried out on many extensive agricultural areas such as Gherset, Fanko, Haykota in the Gash-Barka region, and around Beilul areas of the Southern Red Sea region, as well as Tslema and Adi-Quala in the Southern region.

The unit doesn’t limit its activities in making lab tests, but also gives special focus to the strategic seeds that play significant role in food security through finding ways of boosting production. In this respect Mr. Asmerom Kidane, director of indigenous genetic resources said that the unit has issued a publication of the three-year long research conducted on wheat in the environs of Dubarwa. The publication includes contents on how to fertilize the selected seed and boost production to 24-25 quintals per hectare.

“We also conduct joint researches with international research institutions. We have been conducting researches with the Atomic Energy Agency over the past two years. To identify weather indigenous cereal grains have been contributing in enriching the soil mineral contents or not, surveys have been carried out and soil samples have been sent to vena for further laboratory test,” Mr. Asmerom said.

To promote agricultural production, surveys have been conducted in the last three years. Plans have also been charted out for the implementation of such agricultural activities in the Gash-Barka and Southern regions which demands unique agricultural machineries that do not disturb soil’s organic balance. Another area which the Ministry of Agriculture plans to develop is joint farming and afforestation activities. A survey has been conducted on 54 varieties of shrubs and trees in the Dubarwa sub-zone.

The unit for forest and wild life conservation also collects best species of varied plants that have been conserved for a number of years. This unit also acts in reproducing unique species of plants that are at the verge of extinction. To meet the demands of animal feed and there by boost milk production varied nutritious animal feed have been introduced.

The varied units collectively play significant role in preserving indigenous genetic resources. The gene bank has been regularly extended since 1992 and now meets international standards in terms of laboratory equipment. So far, around 4,500 local vegetation have been conserved in Halhale Agricultural research center. Of the varied vegetation species preserved in the center, 92 percent are feed grains for humans while the rest are for animals.

Through conducting intensive researches on varied plant species, the research center has been making due contribution in identifying drought and disease resistant species and conducting cross breading to raise productivity.