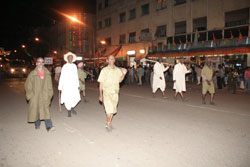 The 20 years of independence has been an experience for the Eritrean people to face countless challenges and pass through intending hostilities to dilute their unity for the national development drive and self reliance. The people and government of Eritrea have encountered a myriad of inconveniences throughout the 20 years of endeavors for development. Nevertheless, it was due to their relentless strives and hard work the Eritrean people along with their government managed to secure the sovereignty of the country and achieve these remarkable all round developments throughout the country. At points in time, these realizations have been assessed in different occasions with positive results. Celebrating the Eritrean independence anniversary has also been a witness to comprehend that the objective of the people and government of Eritrea goes hand in hand towards the full realization of economic security and full fi ll other social demands. During the occasion all regions, administrative zones, Ministries, corporations and governmental and nongovernmental agencies participate to display their accomplishments and share their experiences through a means of carnivals and many other showcases.

The pageants go on display sector by sector on their specified time and place so that it would better for display. Unlike the other years, this year’s Independence Day anniversary is planned to be celebrated in an exceptional way that would participate all peoples and sectors of the country.  All Ministries and Regions will have symposiums, and the venue will be in different cities throughout the country, in that, people will get greater opportunity to easily participate and enjoy the symposia in person and will generate imputes.

Of course people are always out there to celebrate and participate their Independence Day anniversary year after year, but this year, the extended preparation program is expected to  have greater role to colorfully celebrate the Independence Day with greater participation of the people from within the country and abroad. Exceptional creativity works are outlined for the Independence Day anniversary preparations including the symposia of all ministries and administrations. Speaking about the objective of the symposia, Minister of Education, Mr. Semere Russom, chair person of the National Holidays Coordinating Committee said that symposia will briefly reflect the developments that have been registered through the Warsay Yikealo development campaign, and all sorts of achievements will be assessed and reviewed sector by sector, on national level.

Ensuring food security, extending social services and securing infrastructural activities will be among the issues on display during the occasion.  Generally, according to Minister Semere, the objective of the exceptional Independence Day anniversary celebration preparation program is to evaluate the all and sundry development undertakings that have been carried out in the years of independence, and tell the truth to the general public. Setting ground to get together and put things at ease letting the people to discuss together, the symposia will help the people understand that they are all together after all. Because, the practice and the candor coupled with the desire to work together always make the Eritrean people step-up their strength for the common goal. Thus, this point makes true that the points on which the Eritrean people differ are few and the points on which they agree are many. It is only by the shared courtesy of the people and government of Eritrea the country attained this stage of development.

These 20 years of independence are the basic experience the Eritrean people have ever had to enjoy and strive to develop their country and help one another in a way that they would create an independent and developed sovereign nation. “Through these outlined symposia, we have the plan to show the general sketch where we started our journey? Where have we been passing through? On which stage are we today? And at last what is our journey geared towards?” said Minister Semere. He further explained that the symposia are expected to present the efforts that have been exerted focusing on the long-term self reliance, and the people would then renew commitments on reinforcing the development drive endeavors so as to cut economic throttling once for all.

As restoring strives in social re-organization policies goes hand in hand with development and economic growth strategies of the country, our independence anniversary celebrations always remain light torch to help us identify how strong goes our bond to one another and understand the spirit of every Eritrean national to shoulder their country and people to the ultimate stage of development. During the occasion, therefore, these symposia will present their demonstrations through different presentation systems like statistically with the help of exhibitions and drama. Through media, interviews, panel discussions, pictorial presentations and workshops are also part of the program for the preparation of 20th Independence Day celebrations.

On regards to the reliability of the symposia if they could really be dependable to evaluate and assess the overall development achievements within the past 20 years of independence, Minister Semere indicated that each symposium will try to work its best to present the general highlight of the accomplished outcome. He said that it would be impossible to review line by line the whole development activities of 20 years in three days, but giving highlights at least in brief makes the work important. As per the program outlined, the symposia will extend the late weak of February to the mid of May and will be expected to give weight to the Independence anniversary celebrations as it will have time to provide some remarkable deeds that took place during the independence years. Besides, artists will have their part to do their best to add color the anniversary celebrations both individually or in groups.

To further enhance the celebration programs, Minister Semere recapped that it is his aspiration that   the people, especially youngsters, would prepare to celebrate the Independence anniversary colorfully for the past independence years the experience of untold challenges and, at the same time, they are years of prosperity.

The Importance of Manners in a Society