Ministry of Education: 20 Years of Purpose 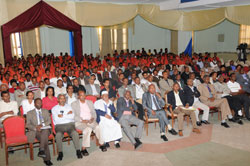 The 20 years of independence have been a period of Eritrea’s pride in a number of ways.  One couldn’t imagine any sort of achievement without implementing the groundwork that contribute for comprehensive development in varied sectors that require skilled and knowledge-driven human power that would in turn give impetuous to all sorts of development. The key element that plays a determinant role in affecting almost every sector is thus education. Educating societies is therefore building a nation.  Unless all members of a society are educated, there would be no comprehensive individual or national development.  The education sector in the past 20 years has solved much of the nation’s deficits through skills that have been acquired in many areas of specializations. An educational system which is directed under the principle “Education for All” has enabled even the remote parts of the nation become beneficiaries of access to education.

While building an educational system that satisfies both personal and national interests, intensive researches were conducted so as to develop a viable national curriculum that meets the demands of the contemporary world. Since curriculum functions as a means of implementing the set out goal of building a sustainable educational system that lays groundwork for effective learning and teaching process, a functionally relevant curriculum was designed.
As part of the overall nationwide symposiums being held by various sectors  under the team “ Eritrea: twenty years of dignity”, the Education Ministry’s symposium was conducted from 25th to 27th of February at the Expo Hall and  became a good evaluative moment for the overall educational journey of the past twenty years. The department of curriculum development was in the early days of independence engaged in designing functional curriculum with an approach to an educational system characterized by knowledge rather than content based teaching system. Curriculum development passed three phases of development mainly in revising the curriculum and preparing educational materials for general education that ranges form grades 1-11.

Providing basic education to every citizen is compulsory and a fundamental human right in Eritrea. Educating senior citizens is also part of the over all educational policy. Such a broad educational plan grants a chance to those who never went to school at the right school-age.
The symposium was prepared in a way that represents the general achievements registered in different areas of educational activity such as general education, technical and vocational education, informal education and adult illiteracy eradication program, intensive teachers training program, as well as current developments and future prospects of institutions of higher education.

Progress registered in curriculum implementation from 2004-2011 based on local resources indicates that Besides preparing educational materials for students, finalizing teacher’s guide that facilitates diversified instructional approach, books for adult literacy and post literacy program along with other supportive materials have been provided. The continuous engagements in educational development plan have played due contribution in improving professional competence of curriculum developers. Stating the axiom that “Adults don’t learn for the sake of leaning” Dr. Araya, said that a curriculum should be drafted to bring change in people’s standards of living. He also cited Eritrea’s macro policy on education, w

hich states that students should be cultivated to be multi-skilled. Such a skill could be achieved through vocational trainings.

The educational symposium also reflected the endeavors that have been taken to nurture citizens equipped with skills on the basis of individual interests. Some projections in the symposium portrayed students’ participation in different cultural and artistic activities that include creative and innovative products. One could easily draw future development of such creativities if supported with enriching courses.

ment of 5 additional institutions and other three vocational centers and the opening of business and Management College.

Achievements registered in illiteracy eradication are highly tremendous.  The 25 centers of literacy that were functioning in the early days of independence have now reached to more than 800. Accordingly the participation of illiterate citizens has risen in great numbers.   According to Eritrea’s definition of literacy, a person who has the ability to read, write and solve basic arithmetic operation with understanding is literate.   The third paper which was presented in the symposium was about National Literacy Survey. Mr. Oqubamichael Habte yohannes, Head of the research unit at the ministry of education discusses about the intensive campaigns that have been carried out through out the country. On the basis of the aforementioned definition of literacy rate in Eritrea is now about 67%. Bering in mind that literacy rate has greater impact in driving all sort of development, the participants of the symposium forwarded suggestions towards taking aggressive measures in eradicating illiteracy,  giving special attention to educating senior citizens as the findings show greater number of illiteracy in the elderly people.
The three-day symposium which portrayed a 20-year of educational journey, achievements registered and challenges that were addressed, current qualification of education, range of educational access and future action plans was closed on 27th of February.