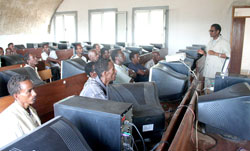 If the world had believed in material resource or wealth as a main source of development in the past, it doesn’t anymore. The evolution of science and its sophistication has enabled the use of resources to yield a multiple produce. Hence the game has become focusing on the ways of maximizing benefits without increasing resources. In other word it’s about gaining 10 from the same resource we used to get 1 or 2. The magic is what we call knowledge and the system is what’s known as knowledge based economy, which has become the center of today’s development in the world. Knowledge based economy is the integration of knowledge in the economy of a certain country. In this equation the role and educated mind of the developing countries is of great concern and determining factor in their success. Here of course the youth once again are the focal point.

Everywhere in the world educational institutions are at the forefront of the dynamic development and breakthroughs in the various fields. They are the engine of change and the pushing factor for the growth of countries. Their effectiveness is in their ability to come up with a better way of accomplishing things or that augment produce. This trend is generally weak in developing countries and lies at the heart of the chronic problem of the educational systems. To a large extent the scholars and skilled, and especially the youth, have not been incorporated in the overall economic activities of countries effectively. Hence it has been to the most part a wasteful system. However, there are some hopeful sparks of accomplishment here and there every now and then; thus giving the impression that it is not at all impossible.

Education indeed can become the vehicle of change in the developing countries with tangible result in the betterment of the lives of the people. In Eritrea for example this prospect is being seen from the agricultural institutions. We are witnessing the accomplishments of the agricultural educational institution of Eritrea lately, apparently suggesting the hopeful prospects of the endeavor in the sector.

This confirms the traditional truth that investment in agricultural education brings a high return as was seen in the green revolution. It also shows that the new educational strategies in the field have been prudent. One institution, which is engaged in researches to improve production and find breakthrough in agriculture, is the institute of Agricultural Research and Human Resource Development of Halhale, Dubarwa. This institution has been introducing new types of seeds that can give more yields and distributing it to farmer across the country. An activity we’ve been lacking though highly in need of. The impact is showing off, as farmers are becoming the beneficiaries of this effort already.

It is also good to remember that the deep effect is yet to be seen in the future for the institutions are in their infant stage right now. The fact however is that the trends so far seems to suggest the future holds so much for these institutions to reserve a major spot in the overall policy of food security and development of the country in general. This might be just one field of area. It nonetheless, has become a living proof that the true essence of education lies in its ability to deliver change for the better. Hence, in the various fields of studies, this is what has always been expected. Here of course, the expectation has always been taken for granted to the point where it is almost a cliché. The challenge, and in fact the biggest one, is realizing the need to make our scholars really understand and get this idea. True understanding would undoubtedly yield a spirit to engage to the above end whole heartedly.

The dialectic even goes further because anyone who embarks upon a task whole heartedly is bound to prevail over the challenges. This is where critical observation is needed as far as education and scholars are concerned in countries like Eritrea. The reality of most developing countries reiterates this fact in a somber tone. It is indeed common scenario that young scholars have become a mere consumer of inputs with no outputs at the end. This waste of multiple resources from its meager lots is what has been keeping these countries in the vicious cycle of poverty.

And sometimes when there actually are brilliant scholars who can really bring change, they would, more often than not, be part of the brain-drain phenomenon. It would, of course, not be justice to hold such people solely responsible to this sad circumstance. The fact remains however; it is an absolute absurd and ironic reality. For as far as the need for such people are concerned, it is in developing countries that there is much to be done.

Looking from this point of view, it would seem that it is the duty of an enlightened person to pay its debt to the society that has provided that person with the education. This debt requires not only being there for the people, but being there in a meaningful way. The meaningful existence of scholars therefore can only be when they show something for what they have learnt; and when they change their society for the better. Any less than that, then their relevance would not be there.  The above example of the Halhale agricultural institution is the right course in the road of development. Moreover it has set a good example that colleges, universities and research institutions need to determine their unique functions and the special attributes that they can offer students and their community. This is what gives meaning to education and scholars as change is the essence.