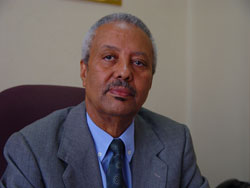 What can be said of the 20 years journey of the Ministry?

It is difficult to list the work accomplishment of the Ministry in detail. After independence, the construction and reconstruction process of the war-ravaged infrastructure facilities of transport and communications had to start from the bottom. Roads connecting big and small cities and towns as well as remote areas have been renovated and constructed. Building roads is a basic necessity for nationals to improve their living standards and speed up other spheres development activities. Besides, railway and marine transport services were revitalized and it could be assessed that satisfactory tasks were carried out considering the time frame. The reconstruction of railway through internal capacity attests to the Government’s principle of self-reliance.

What about communications services?

In communications service also, expanding and modernizing efforts have shown rapid growth. In the early post-independence period, the infrastructure and equipments of communications were very much damaged and it was challenging to renovate them. The advancement of communications, particularly in telephone services began to grow from 2003 onwards, after the Eritrean Telecommunication Service was founded. Mobile telephone service was introduced in 2004 and since then its progress has been dynamic. Telephone lines were renovated and old ones were replaced with new lines. Moreover, the installation of marine-based fiber optics this year is expected to further upgrade communication services especially internet.  As regards to postal services, it was expanded to sub-zones and its service has improved with the introduction of computerized work procedure.

What can you tell us about the Eritrean Civil Aviation’s activities?

Airports in Asmara and Assab had underdeveloped infrastructure before independence.  Thus, it was necessary to invest on renovating and constructing new airports. Asmara International Airport was renovated and modern equipments were introduced to ensure the security of transportation. Besides, Massawa International Airport, which was constructed in recent years, is expected to start operation this year.  Sawa airport was also build in the post-independence period. The first phase of this department’s development includes the rising of civil aviation services and establishment of Eritrean Airlines from 1991-2004. During this period the experience of department was further enriched. Along this, NassAir began rendering services which played great role for Eritrean nationals to connect with the Homeland. The second phase 2005-2010 was a transitional time to the current stage. Despite of so many challenges, the civil aviation services was able to function on regular basis. In this third phase, NassAir and Eritrean Airlines have been merged together and this would help bring about better outcome. In general, the department would exert utmost efforts to achieve more gratifying results.

As you have mentioned, the vision of the Ministry is to create competitive transport and communication services. What is your opinion of the progress achieved so far in comparison to other countries?

We can only compare the current reached development with countries that have similar capacity with us. Within the past 20 years, the work accomplished was enormous though the border conflict and ensuing challenges have created a setback. The impressive achievement registered demonstrates the strenuous work being carried out to translate this vision on the ground. We would further make intensive efforts to provide competitive and reliable services. Comparing the stage we have reached now within such a time frame and limited resource, we can say that we have progressed greatly.

Explain to us the efforts undertaken to upgrade human resources in this sector?

Each sector is engaged in providing skill-upgrading courses to promote its manpower. New graduates assigned to work in the sector receive training and are encouraged to promote their profession in all possible ways. ERI-TEL could be cited as an example for its exertion in nurturing skilled youths.