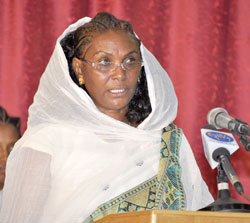 In a commemorative event held in Akria district here in the capital where government and PFDJ officials as well as guests and friends were present, the head of the central region branch of the National U

Indicating that the participation of women in different sectors of the economy is encouraging, Ms. Tek’a said that the ongoing nation building process as well as the provision of social services in different parts of the country is improving the society’s living standard in general and that of women in particular.

The administrator of Akhria district, Mr. Hizkias Wihbet on his part said that the education of women is being given priority based on the belief that an educated woman can effectively overcome harmful traditional practices and facilitate the progress of generations.

During the occasion, female students who demonstrated excellence in their academic pursuits as well as women who completed weaving courses were handed out prizes.
Reports from different areas indicated that March 8 was commemorated in the Anseba and Gash Barka regions as well as in Milan, Italy.

Meanwhile, in its statement issued on the occasion, the NUEW stated: “ At a stage where we are moving towards a promising future, more work is required to ensure equal opportunities for women to the nation’s resources.”
Moreover, the statement added that the strength and commitment of Eritrean women is still intact and that they will work even harder to ensure women’s equal participation in national development endeavors.