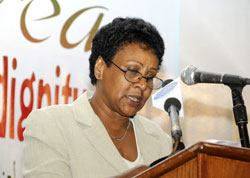 Health Ministry’s symposium was opened today at Expo ground as part of the on-going national symposiums under the theme “Eritrea: 20 years of  Dignity.”

Asmara, 11 March 2011 – Health Ministry’s symposium was opened today at Expo ground as part of the on-going national symposiums under the theme “Eritrea: 20 years of  Dignity.”

In an opening speech, the Minister of Health, Ms. Amna Nurhusein, indicated that visible achievements have been registered in efforts to ensure equitable expansion of health service along with the necessary facilities at huge expenditure.

She further noted that on top of the renovation of the previously existing health care service, new health institutions including national referral hospitals, 13 hospitals, 50 health centers and 112 health stations have been constructed even in remote areas.

Moreover, the Minister stated that a number of training centers and colleges have been opened that are making vital contribution in nurturing many health  professionals. She  said that the recommendations and suggestions adopted in the course of the 3-day symposium would  bolster future work programs.

Also on the occasion, an exhibition portraying the tasks accomplished and the challenges encountered over the past 20 years was staged.