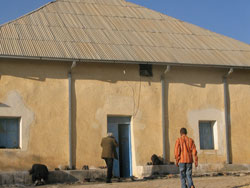 When Abune Menkerios was young, he used to travel to various monasteries and test his life through hardship like bad weather, thirst and hunger. During his travels, he stayed in the highest peaks of Rora, Adi Gulti for years.  In this place he dug a hole as deep as his height and planted sharp branches on the four sides of the hole. He stayed in this hole suffering from hunger and cold with the blades wounding him during his movement. It is believed that he stayed in the hole for years. Once his stay in this place was concluded, he removed the blades from the holes and placed them at one point and moved out of the hole. This is one of the first known miracles of Abune Menkerios.

Goda’e is the place where Abune Menkerios performed his biggest miracle. He was staying in one of the highest hill of the area, a place at present called “Mariam Birequah”. He stayed in this place for seven years. Later he moved to the deep forest which at present is known as the praying place of Abune Menkerios. During his stay in this place he used to teach the Old Testament to the priests and inhabitants of the area.

According Aba Basilos, there used to live a huge snake which preyed on the inhabitants and livestock of the area. One day Abune Menkerios walked to the snake and blessed him with his cross. At that moment the snake scattered into fifty pieces and died.  The cross is still in the Menkerios Monastery where holy water is poured over it and many wash under it believing that they will recover from their illness. The cross is still a very treasured and respected cross that is handled with great care among the monks and priests of the monastery. Abune Menkerios had ordered to dump the remains of the snake in further place called Debene.

“At the age of 66, Abune Menkerios , entered to the present day  Menkerios Monastery then called the Demah Monastry in the 13centruy A.D .  At the beginning the place was desert like without any kind of plants growing or any water source around the area. Abune Menkerios and his students settled in the place with all the hardship eating whatever plants they could find in the area and drinking any available water and used to wear animal hide,” said Aba Zemicheal. Abune Menkerios pursued his life in one of the caves. Later the buildings that are standing in the monastery today were built by Mrs. Gorzit, and Mrs. Sebenedengel brought some clothes to the followers staying in the Monastery.

At the early years of the monastery there were around 500 male and 400 female monks staying in the place but later due to a contagious disease many died and the rest fled the area. For about, 191 years the monastery was abandoned until Aba Tekleyesus Yemaneab re-established it.

Abune Menkerios was from a family descended from Israel. He passed through a lot of hardship in his life, and died at the age of 120. It is also believed that he used to have prophecies of the future. According to the legend in the area, during the invasion of Ahmed Gragn, he was fighting against emperor Dawit. On one occasion Emperor Dawit asked Abune Menkerios if his forces can win against the “Salahudin”- that was the name of Ahmed Gragn’s forces: and Emperor Dawit won as Abune Menkerios predicted. After this incident Emperor Dawit gave the monk lands so that the followers and students of the Abune can have roof over their heads and land to farm.
Today the monastery has land for farming and a crop grinding machine as a means of income to the monks. The Menkerios monastery celebrates its annual anniversary on December 25th of every year.