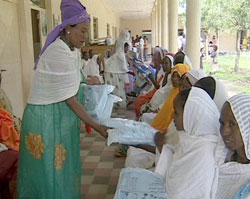 Malaria is a deadly disease and is endemic in 109 countries of the world and dreadful and   grave in developing countries in general and in sub-Saharan African countries in particular. Malaria in Eritrea is focal, seasonal and unstable and used to be number one cause of morbidity and mortality in Eritrea. The National Malaria Control Program was established in l995 following the liberation of the   country after 30 years of war and the successful national referendum of the country in 1991 and 1993 respectively. The NMCP was strengthened and more structured after the 1998 RBM initiative. In the year 1999 a five-year RBM strategic plan (2000-2004) was developed in cooperation with all RBM stakeholders. The goal of the program was to reduce malaria to such a low level that it is no longer a major public health problem in the country.

The main objectives of th

e five-year plan were to reduce morbidity and mortality attributed to malaria by 80% by the end of 2004 from the levels of 1999 and to prevent the occurrence of epidemics throughout the country. It also developed the second RBM strategic plan (2005-2009) to further reduce malaria morbidity & mortality.  Different integrated control & prevention strategies were implemented so as to tackle the  disease from all fronts. These include early diagnosis & prompt treatment of cases, integrated vector management (ITNs, IRS. environmental management & larviciding), epidemic forecasting, prevention and response, capacity building, operational researches and intensive malaria health promotional campaigns.

Malaria morbidity and mortality was also reduced by 86.5% & 85% respectively to a survey done by the end of 2004. Morbidity trend showed further decline until 2009, by more than 90% in cases and deaths due to malaria. During the period after 1999, the country observed no epidemics. Moreover, the coverage of ITNs among the target populations already surpassed Abuja targets. The successes achieved were a mix of various factors such as high political commitment of the government, dedication of staff at all levels of the health system, good partnership with all the national & international stakeholders, and above all serious involvement of communities in all malaria prevention & control activities.

Monitoring of implementation of activities and evaluation of the cost-effectiveness and efficacy of interventions has also played a pivotal role in informing policy towards better service delivery. The program is engaged in regular monitoring of activities via supervisions, meetings etc and evaluation of interventions via periodical studies such as program evaluation, drug efficacy studies, vector resistance studies and other priority operational studies.

The country, however, has some concerns and challenges like malaria cross-border problem, loss of immunity of the population and higher probability of developing sever malaria among others. The NMCP of the Ministry of Health has successfully completed the two five years strategic plans and has already developed the third five years strategic plan 2010 to 2014 which embraces the malaria elimination continuum.