Bride In the House of Hema 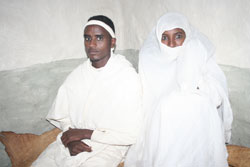 Marriage is socially recognized and approved union of two individuals, who commit to one another with the expectation of lasting relationship, and it begins with a wedding ceremony, which formally unites the partners. Wedding ceremonies are often preceded by various preparations and ceremonies of a given society’s customs and culture.

In addition to the personal relationship between the couple, marriage is one of society’s most important and basic institutions. Marriage and family serve as tools for ensuring the continuity of generations. Even though with time wedding ceremonies have been reformed in various forms, they are still celebrated according to the society’s cultural and social heritage.

In the Tigrigna society, after the wedding ceremony ends the bride doesn’t go to her husband’s home; instead the couple will go to a house of a couple that has longer marriage years in the vicinity.  This house is traditionally called “Biet Hema”. The newly married couple should stay at this house for at least three days, before they go to their own home. This traditional ritual takes place as a good wish to the newly weds and that their marriage would last as long as the couples’. After three days, the brides’ maids, best men and the residents of the village will accompany the newlywed couple move to their own house by singing and dancing till dawn.

Once in the honeymoon house the groom will carry his bride to the kitchen where she prays for the marriage to last long. After that she returns to the house walking on her feet.
Previously, girls were married at early age, and as a result various kinds of games were played in the house where the couples are staying during the honeymoon period so that the bride wouldn’t miss her family and friends. Friends and family spend time playing games which would enable them to know the bride, and she members of the groom’s family and friends.

“Sheded” is one of the games played during honeymoon: in “Sheded” someone is ordered to do something and if he/she is fails to do as ordered, the players will put a stick between the fingers of the player and force him/her to do as ordered. Majority of the time, this happens to the bride since she does not call her husband by his first name until the honey moon is over.

“Sheded” is also played by four sticks, the sticks have both a rough and smooth side, and the sticks are thrown to determine the gender of the first child the newly weds are going to have, and if three of the sticks appear on their rough side then it is believed that the first born is going to be a girl and vice-versa.

The games played at the house of the newlywed couple create peace, love and helps people to meet and know each other. In the past, youngsters used to spend their time at the home of a newlywed couples. Especially in the months of January and February, since those months are not farming seasons, and are the seasons where majority of the weddings held. The youth also play other games known as Aderaras, Gebeta, Handay during honeymoon period.

Gebeta is a game played using a crafted wood; the crafting is usually done by professional craftsmen. In such occasions, females tend to play this game more than males. The game is to collect more stones within the playing board and the defeated player will drink water with ashes in it.

Another popular game among the girls in the house of newlyweds is swinging. A swing is prepared from animal hide and the girls will swing each other in turns where the one pushing the swing shouts “do you want milk or water?” and the one sitting will say milk if she wants to continue the game and water is she had had enough of the game, and if the pushing is not high enough the girls will tease each other by singing a song.

During the honey moon period no member of the family complains about their other jobs or the amount of time spent by the youngsters in the house, the family members will lay off all their work until the honeymoon period is over.In Tigrigna society a bride honored and privileged, therefore, the groom is not allowed to leave her alone without the consent of his friends. But if he did, the best man ties him to a pole of a house and waits the verdict from his wife.

In Tigrigna ethnic group, honeymoon is a time for friendship, love and peace and there is no room for anger, misunderstanding and fight, if such events occur they are resolved through the elders.

Two Decades of Investment for a Healthier Society (Part II)