Two Decades of Investment for a Healthier Society (Part II) 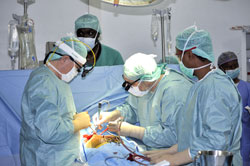 The second day of the Health Ministry’s symposium opened with a study paper that discussed about the activities that have been carried out in maternal and child health care.  Achievements in such health care delivery have been registered through concerted efforts in family and community health care.  Dr. Birhana Haile, Director of family and community health at the ministry talked about health conditions of families and communities in 1991 and the achievements registered since then.

The principal objective of the family and community health department has been reduction in maternal and child mortality and morbidity that would be caused due to complication in pregnancy and in the time of delivery. Dr. Birahna also highlighted that broader coverage of health care services throughout the country and availability of medical equipment and sustainable supply of medicines played a major role for the achievements registered so far. As such the doctor stated that through broad coverage of vaccination and intensive antenatal and postnatal health care services and other interventions maternal mortality ratio has declined from 998 per 100,000 live births in 1995 to 486 in 2010 while mortality rate in under-five years of age has decreased form 148 per 1,000 live births in 1991 to 63 in 2010.

Remarkable achievements that have been registered in health care services in general and in neonatal and postnatal care services in particular are results of concerted efforts and complementarity within different departments of the ministry. Obstetric care services have been introduced even in most remote areas of the country. Dr. Bereket Sibahtu, gynecologist, stated that with the increase in the coverage of attended delivery services, maternal and child mortality has substantially decreased. Owing to broader access to comprehensive emergency obstetric care which increased from 46% in 2006 to 84% in 2010 a number of pregnancy related complications have been prevented. Likewise, in his presentation on child health care services, Dr. Zemichael Oqbe, Director of Orota children’s referral hospital said that the issue of infant care has been the focal point in the endeavors towards safe births and that high-tech medical equipment such as incubators, phototherapies, as well as radiant wormers are being steadily introduced.

One of the major obstetric complications and a social stigma has been fistula. ‘Blocked labor’ results in compromised blood circulation and subsequently to congenital malformation. The Ministry of Health has then been working to eradicate such occurrences through conducting operations on mothers with similar history, encouraging attended delivery and avoiding under age marriages. Mendefera Referral Hospital has been playing due role in solving severe consequences of fistula by rendering free of charge services to women living with fistula. Dr. Habte Hailemelekot, Gyno-obstetrician, pointed out that significant reduction, if not eradication, of fistula prevalence is among the major goals of the health ministry.

Cardio-vascular problems, diabetes, cancer, liver diseases, cataract, lens disorder among others have been among the prevalent health care issues. Some of these diseases can only be solved through surgery. Hence, the Ministry of Health with the collaboration of partners has been working in training surgeons, pediatricians, medical doctors and other health care professionals in various specialties. Owing to such engagement in human resource development a number of surgical activities have been conducted locally through shared experiences of Eritrean doctors and partners form Germany and Italy.

As regards heart related diseases, Dr. Tsegereda Ghebrehiwet, a pediatrician, stated that eight children underwent heart surgery in 1998 for the first time at Orota children’s referral hospital. The establishment of operation theatre and the introduction of advanced surgery equipment from 1999-2002 can be cited as a significant advancement in the field of pediatrics.  In 2009 catheterization unit was established and diagnosing health problems through cardiograph was started. In order to render comprehensive surgical services, an interdisciplinary approach was introduced for conducting cardiac and ophthalmic surgery at a given time. According to Dr. Tsegereda a total of 403 children were operated on from 2002-2010. The surgical unit is now substantially equipped and experience has been acquired.

Surgical activities that used to be conducted abroad have been conducted in Eritrea. The national surgical unit has been given diversified surgical services for patients through out the country. Hospitals such as Orota surgical medical hospital, Halibet, Brhan Ayni opthalamic hospital ,  as well as sembel hospital have been conducting special surgical activates while hospitals of Mendefera, Ghindae, Barentu, Keren, Adikeyih, Assab, Massawa, and Akoredt have been rendering general surgery services.Dr. Abraham Tekle, Surgeon at Orota Hospital indicated that a number of surgeries such as general surgery, orthopedic, ophthalmic, maxilla (facial surgery), ENT (Ear, Nose and Throat surgeries), neurosurgery, ob-gyn, pediatric, and Uro-surgeries have been conducted by the national surgical unit.

The Health Ministry’s symposium touched almost every aspect of health related topics. Dr. Ghenet Meresie, ophthalmologist, on her part discussed about ophthalmic services that have been rendered in Hospital Birhan Ayni. Ophthalmic services have been advancing parallel to the overall comprehensive medical services. As such the different ophthalmic units within Birhan Ayni hospital have been showing tremendous leap in terms of equipment such as optometry, auto-refractors and other screening materials.  Ophthalmic surgery for cataract has been conducted on patients with such problems. Besides the endeavors that have been made to control blindness, the Fred Hollows Intraocular Lens Laboratory which was established in 1994 is now producing 200,000 lenses annually most of which have been exported to Europe, Middle East and  some African Countries. In the last 15 years of its establishment the Fred Hollows Laboratory has manufactured 1.9 million intraocular lenses. To cope with the advances in the field of Ophthalmology it has recently started to produce flexible lenses. The Fred Hollows Laboratory which received different certificates from standardization bodies form UK and the US is also planning to produce eye drops.

The Health Ministry symposium which was conducted from 11-13 march 2011 was concluded graduating four students who have specialized in pediatrics. So far seventeen pediatricians have been graduated through post graduate courses.  Pointing out the graduation event was highly imperative in mitigating challenges in child health care; the Minister of Health, Ms. Amna Nurhusien said that such an event added color to the symposium.

Bride In the House of Hema