Northern Red Sea Region: Looking Back At 20 Years Of Development 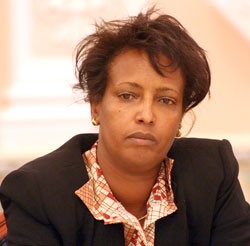 The Northern Red Sea region is the second largest region after Gash-Barka. It is inhabited by more than 350,000 people and is endowed with more than 600 Km of coastline. It is also blessed with 250 islands and 10 harbors.  The region, which is around 34,000 sq. km. is divided in to 10 sub-zones and 101 administrative areas. It is preparing to hold a symposium from March 25 to 26 as part of the on-going symposiums in connection with the 20th Independence Anniversary. During the two-day symposium the region would evaluate the implemented development programs, challenges encountered, as well as future work programs. ERI-TV recently conducted an interview with the Administrator of the region, Ms. Tsegereda Woldegiorgis. Excerpts follow:

Before we speak about the present circumstances, we need to first to realize that the region was a war ravaged area for many years. Its infrastructure, facilities and buildings were totally destroyed during the war waged for liberation. The inhabitants were exposed to poverty, diseases, ignorance and other countless problems. Thus, after securing peace and tranquility of the region, the Eritrean government set about to implement the envisioned development projects. This journey began with the expansion of social services including health, education, potable water supply and putting in place of infrastructure facilities, including in remote areas. New Massawa International Airport was constructed, besides expanding of ports and equipping them with modern facilities. The Hirgigo Power Plant, cement factory, fuel jetty, Free Economic Trade zone and other institutions would serve as a stepping stone for further development.

Tell us about the impact of the undertaken development projects on the lives of the inhabitants?

Most of the inhabitants were leading nomadic lifestyle and were deprived of social services. So, it was essential first to group these nomads so that they could get access to the extended social services. As a result of the strenuous efforts, many families have now settled down in villages and are obtaining education, health, water and electricity services. Besides, campaigns are underway to raise public awareness regarding proper harnessing of marine resources which in turn are enabling them to raise their income.

What tasks have been accomplished to exploit the tourism potential of the region?

Starting from its landscape, strategic location, history, unpolluted sea and biodiversity, every part of the region is a tourist destination. Recognizing these rich assets and familiarizing them with the local inhabitants is very important in preserving and making optimal use of it. We know tourism is a non-smoke industry and is used as income-generation, however, it requires careful utilization from the beginning to avoid its negative consequence. Hotels, recreational centers, museums and other service rendering establishments are being provided. The number of both domestic and foreign tourists are on the rise and our efforts are continuous to develop tourism sector.

How do you evaluate the tasks accomplishment so far and the challenges encountered in the process?

At the beginning, every thing was a challenge, but now, many impediments have been defied through steadfastness and joint efforts of the people and Government.  It was not simple to put in place various communications and transport facilities to connect far places, provide education in remote areas and change people’s attitude towards the advantage of modern health services. Commendable tasks have been accomplished and the remaining set goals would be attained through enhancing our knowledge and hard working spirit.