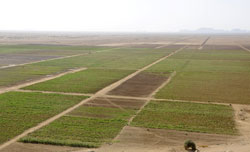 There is a Tigrigna saying “Tetsgibeni kitcha ab moklo’a efelta” (I know the bread which will satisfy me while still in the oven). This famous Tigrigna saying has been proved by the tour participants to the Gash Barka region during their first day tour to historical and developmental sites of the region on 3 March 2011.Zoba Gash Barka is extraordinarily rich in its resources in terms of agriculture, forests and animal life, both domestic and wild and mineral resources. The modern agricultural facilities at Gerset and the two Fancos, the gum trees found around Omhajer, crocodiles of River Tekeze and gazelles and wild pig like (Wedimbi), tigers and hyenas, and variety of minerals.

As Omhajer is a place of interest for eco-tourism with its indigenous trees and wild life the modern mechanized farms are where one could observe first hand where Eritrea is heading in terms of ensuring food security. Food security by its own toil and renovating minds of its citizens. The vast farmlands that are in place and already cultivated at Gerset, Fanco Zimue Fanco Rawi, Aligidir, Adi Umer, Molober and Afhiblo are vibrant demonstrations for in a short period of time Eritrea not only could feed its own people but will have the potential of exporting agricultural products such as sesame, cotton, variety of fruits like Banana and vegetables. The above mentioned agro-industries were initiated and become reality by the government of Eritrea from the scratch some years back these areas have been a barren land where there was no sign of any kind of developmental activity. But in about ten years time these areas have been the concentration of heavy investment of the government in its bid to realize the much conceived self-reliance and realizing its set developmental goals.

Millions of cubic meters of water are being conserved in those dams and are expected to cultivate hundreds of thousands of hectares of land. The products are mainly cash crops currently for local consumption and have the prospect for export in the near future. From the many types and categories of tourism agri-tourism, eco-tourism, wild-life tourism and adventure tourism fit to this part of Gash Barka. Agri-tourism, as it is defined most broadly, involves any agriculturally-based operation or activity that brings visitors to a small and large scale farms. In this respect the large mechanized farms that are found in  the region could fall into this type of tourism where people could go visiting the farms and on their way  buying produce direct from the farms, navigating through the cultivated land picking fruits and staying there enjoying the clean air and the breathe of the trees, vegetables and grass.
Wildlife tourism can be an eco and animal friendly tourism, usually showing animals in their natural habitat.

Wildlife tourism, in its simplest sense, is watching wild animals in their natural habitat. Wildlife tourism is an important part of the tourism industries in many countries including many African countries. It has experienced a dramatic and rapid growth in recent years world wide and is closely aligned to eco-tourism and sustainable-tourism. In our case the Elephants in and around Awgaro, the wild life surrounding Omhajer and other places of Gash Barka are perfect places for this kind of tourism. Parallel to the efforts for developing wildlife tourism precautionary measures should also put in place for wild life tourism in spite of its growing it has also negative impact that should be foreseen. The disturbance of the natural habitat of the animals and eventually forcing them to abandon their places. However, with appropriate measures putting in place they are perfect means of the growth of tourism industry of a country. That is what the tour participants observed and privately discussed among themselves at the end of the first day of the tour in the region on the way back to Tessenei.

When Our Voices Soar High!