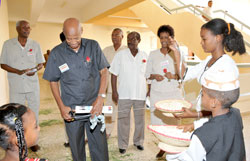 As part of the national symposium being held in connection with the 20th anniversary of Independence Day celebrations, the symposium of the Northern Red Sea region opened today in Massawa city.

Massawa, 25 March 2011 – As part of the national symposium being held in connection with the 20th anniversary of Independence Day celebrations, the symposium of the Northern Red Sea region opened today in Massawa city.

Speaking at the opening ceremony, the regional Administrator, Ms. Tsegereda Woldegergis, stated that the symposium serves as a forum in highlighting the hardship traversed and the accomplishments registered in the process over the past 20 years.

She pointed out that the region which is situated in a very strategic location is endowed with marine resource, ancient relics of history and civilization, in addition to tourism, agriculture, minerals and fisheries resources. It also endured colonial atrocities and witnessed the heroic feats of gallant freedom fighters, besides being a gateway of Islam and Christian religions.

She also outlined the major development programs implemented over the past 20 years towards ensuring social justice and improving the people’s living standard with priority attention to the previously marginalized remote areas.

Also on the occasion, the Secretary of the PFDJ, Mr. Al-Amin Mohammed Seid, opened an arts exhibition portraying the development tasks accomplished in the region in the post-independence period as regards infrastructure, economic development, social service, tourism and relics, among other.

The director general of administration and finance in the regional administration, Mr. Yosef Araya, outlined the size and structure of the region, as well as the available resources and opportunities.

Likewise, the head of the regional museum, Mr. Yohannes Gebreyesus, explained the existing relics in different parts of the region and the study undertaken on them, as well as future exploration plans on some sites. In this respect, he highlighted the fact that the region is endowed with rich historical, archeological and tourism potentials.