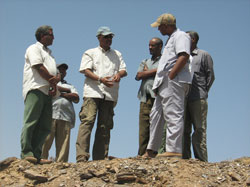 President Isaias Afwerki conducted an inspection tour of development programs in the sub-zones of Tessenei, Haikota and Golij from March 20 to 24.

Tessenei, 25 March 2011 – President Isaias Afwerki conducted an inspection tour of development programs in the sub-zones of Tessenei, Haikota and Golij from March 20 to 24.

In the course of the tour, the President visited the Bademit micro-dam in Omhajer under construction through Bidho Construction Company, as well as the development tasks being undertaken around Gerset, Fanko-Tsimue and Fanko-Rawi, during which he exchanged views with pertinent heads.

President Isaias observed the development programs underway in Gerset at substantial expenditure with the active participation of the people and the Government.  He received briefings that 75% of the demanding task as regards installation of water pipelines has been accomplished.

He subsequently observed the preparations being made to cultivate cotton on about 700 hectares below the Gerset dam, during which he was briefed that about 1,500 quintals of cotton harvest was obtained from the previously cultivated 60 hectares. The President also conducted discussion with the concerned heads on ways and means of boosting production to a higher level.

Moreover, President Isaias visited animal reserve land involving 115 hectares in Gerset with a view to ensuring safe haven for wildlife, and thereby promote tourism activities. He also held discussion regarding the speedy implementation of the program.

Moreover, the President inspected the construction of 200 foam-concrete residential building complexes in Gerset that are nearing finalization, during which he exchanged views with managers on ways of speeding up the project as it is a bit delayed.

Also in the course of the visit to Fanko-Tsimue Dam Agricultural Project that has made commendable tomato supply to Banatom Factory this year, he lauded the strong popular participation in the project. In this connection, President Isaias underlined the need for constructing residential complexes around the agricultural sites so that the nationals who come to work in the project from the sub-zones of Tessenei and Haikota may get relieved from traveling to and fro.

Besides, the President inspected the setting up of Foam Factory in Alebu aimed at expanding the construction of foam-concrete building complexes, the Banatom Factory that processed about 6,500 quintals of tomatoes this year and the Eritrean Cattle Corporation that grouped animal husbandry activities which used to be practiced at the individual level in different areas of Gash-Barka region, as well as the Alebu animal feed processing plant.

In briefings they gave to the President, experts of the respective plants indicated that the Eritrean Cattle Corporation is undertaking major tasks in Alebu, Gerset, Adi-Omar and Tekreret in a bid to raise meat and dairy products  with special emphasis on cattle hybrid. To this end, the Alebu animal feed processing plant is supplying about 300 quintals of highly nutritious animal feed on a daily basis, they elaborated.

President Isaias stressed the need for enhancing public participation in the activities so that such plants may boost production and back up efforts to achieve food security. The available limestone resource in the region needs to be properly utilized for construction works, he stressed.

The President concluded his 4-day tour of inspection by visiting the metal and wood plant of Homib Construction Company.