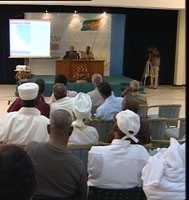 The two-day Symposium of the Northern Red Sea region that was conducted in Massawa under the theme: “Eritrea: 20 Years of Dignity” concluded today.

Massawa, 26 March 2011 – The two-day Symposium of the Northern Red Sea region that was conducted in Massawa under the theme: “Eritrea: 20 Years of Dignity” concluded today.

Various study papers focusing on administrative system, economic development, infrastructure facilities, social services, historical and archeological potentials as well as discoveries were presented at the Symposium on which extensive discussion was conducted.

In a paper he presented, the director general of economic development in the region, Mr. Tekie Tewolde,  outlined the encouraging achievements registered over the past 20 years in the domains of agriculture, fisheries, tourism, trade and industry, social services, infrastructure development and construction works. In this respect, he emphasized the need for making increased investment in human resource development, especially on the youth.

Mr. Tekie noted that out of the available 130,000 hectares of  cultivation, over 90,000 hectares have been utilized, and that there are plans to put the remaining portion under cultivation. He further pointed out that a number of agricultural infrastructure programs have been implemented with a view to raising productivity and improving the living standard of farmers.

Highlighting the endeavors made in rehabilitating previously neglected  extensive farmlands through popular campaign and the Summer Work Program, Mr. Tekie indicated that the necessary control mechanism has been put into practice to preserve forestry and wildlife resources, besides creating reserve lands in various areas.

As regards marine resource, he explained that major tasks were accomplished over the past 20 years to reactivate the sector. In this connection, he stated that training courses have been offered in a bid to encourage the activities of traditional fishermen and upgrade their lifestyle.  Assistance to the tune of about 20 million Nakfa was extended to this end that borne fruitful outcome.

Noting the projects implemented to modernize Massawa Port and bays so as to develop the Free Economic Zone, Mr. Tekie mentioned the construction of the Massawa International Airport  and the putting in place of other infrastructure facilities.

Likewise, the head of the regional museum, Mr. Yohannes Gebreyesus, highlighted the existing relics in different parts of the region and the study undertaken on them, as well as future exploration plans on some sites. In this respect, he noted the fact that the region is endowed with rich historical, archeological and tourism potentials.

Also in a paper he presented, the director general of infrastructure development in the region, Mr. Mussie Misgina, pointed out that land leveling scheme was carried out in a manner that ensures equitable and fair land utilization for better production. He further said that 60% of the population in the region has now access to potable water supply, and that concerted action is being taken to raise the figure to 80% by the year 2015.

Mr. Mussie went on to indicate that efforts are underway to expand electricity service from 25% to 35% , and that the coverage of mobile phone service has reached 60%. Also in line with endeavors to ease potable water supply problem, plans have been mapped out to dig wells in 9 villages, install power supply in 6 others and construct underground ponds in different parts of the region.

Similarly, the director general of social service, Mr. Tesfai Tekle, pointed out that educational and health services have shown a fourteen fold and tenth fold growth, respectively. Besides, land for agricultural and residential purposes has been allotted to a total of 13,550 repatriated nationals.

A number of Government and PFDJ officials, as well as representatives of the people and institutions from different parts of the region participated in the Northern Red Sea region Symposium that took place from March 25 to 26.