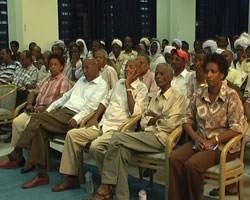 Speaking at the conference, the Minister of Agriculture, Mr. Arefaine Berhe, stressed the need for exerting coordinated endeavors with close supervision of agricultural experts so as to promote forestation program. The same should also apply in preserving wildlife resource, he added.

Likewise, the Minister of Justice, Ms. Fawzia Hashim, pointed out that the participation of all is decisive for the effective implementation of drafted laws pertaining to taking the necessary measures against those individuals engaged in illegal cutting down of trees and wildlife destruction. To this end, she emphasized the need for closely working with community magistrates.

The Administrator of the Northern Red Sea region, Ms. Tsegereda Woldegergis, said on her part that the mere holding of conference could not protect forestry and wildlife resources but rather fostering coordination regarding its preservation and monitoring.

Similarly, the head of the Agriculture Ministry’s branch in the region, Mr. Tesfit Gebrezgiabiher, outlined the various causes of deforestation and wildlife extinction in the region.

The participants of the conference adopted a number of resolutions and recommendations vital for preserving forestry and wildlife resources that need to be put into effect as of next month.

Seminars to nationals in Italy